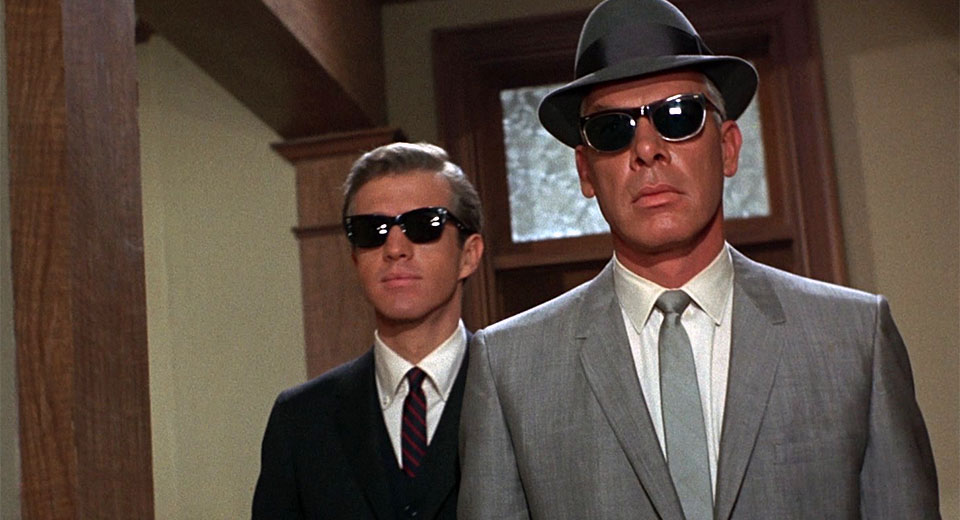 If it weren’t a masterpiece, Don Siegel’s 1964 Hemingway adaptation The Killers would still offer one of the most satisfying images in Hollywood history. In a cramped garage, the yin and yang of Hollywood square off, and John Cassavetes punches Ronald Reagan in the face. This utopian moment is certainly worth more than the price of a movie ticket, and it arrives attached to an affecting and deeply cool crime picture starring Lee Marvin and Angie Dickinson. It was Reagan’s last feature film before he stumbled through a fundamental reshaping of American politics.

The 40th president of the United States plays Jack Browning, a crime boss who employs Cassavetes as a driver in a heist. They both love Dickinson, who can’t choose between the fineries of life as a moll and the thrill of romance in fast cars. Marvin is one of the title’s killers, a hardass near retirement troubled by Cassavetes’ lack of resistance during the latter’s execution. He investigates the mysterious contract and we’re treated to a flashback retelling of a racecar driver at odds with love and fortune.

Let’s indulge a simplistic fantasy in these dark times and celebrate Cassavetes as the finest product of Hollywood, a passionate artist sustained by the machine as he worked to undermine its perfidy. Let’s also cast Reagan as tinseltown’s worst export, the odious schemer who shattered the levee meant to keep back Hollywood’s pool of facile morality from political reality. For their entire careers, Cassavetes was all that was best of youth and Reagan was all that was worst of old age. In Siegel’s film, one’s fantastic and vibrant while the other’s a hollow, pomaded suit. It doesn’t take two guesses to find which is which. Of course Reagan wins by financing the hit—though he gets his, too, thanks to Marvin—just as he spent a political career chasing off noble freaks and dreamers. But the single blow Cassavetes strikes has the stronger echo. In 2017, it’s the punch we desperately need.