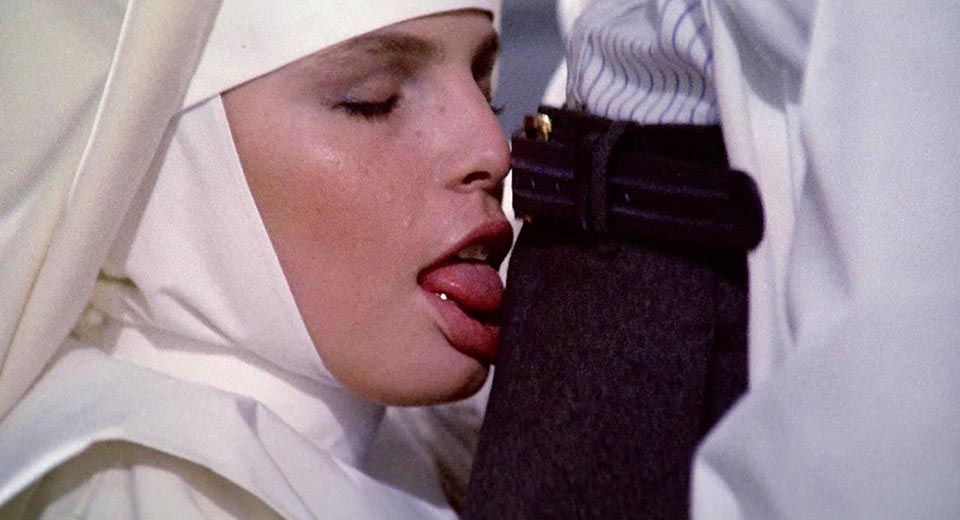 The nunsploitation subgenre exploits the pungent fascination intrinsic to the figure of the holy sister, whose service and sacrifice render her the earthbound link between man and his redeemer, yet whose body remains unavailable to men, cloaked beneath her shapeless habit. Therefore the violence and sexuality of most films of this kind rely on the physical relationships between women — lesbian nuns, sadistic Mother Superiors — or between a woman and herself, through masochistic self-flagellation, titillating supplication taken to extremes. Killer Nun is just such a film, though its departures from the model make it both thoroughly reprehensible and perhaps the masterpiece of its kind.

We learn within the first fifteen minutes of Killer Nun that Sister Gertrude, the head nun at a convalescent home, has recently undergone brain surgery to remove a tumor and since acquired an unfortunate morphine habit, which drives her to treat the patients in her care with needless cruelty that has done little to dissuade doe-eyed Sister Mathieu from an ill-fated, sexy crush. Who better to portray our erstwhile Catholic heroine than Anita Ekberg, perfectly made-up at all times and whose infamous physique can't help but insist upon itself the more thoroughly it's withheld. Patients begin dying under unnatural circumstances amidst a not-even-whispered campaign of gossip surrounding Sister Gertrude's apparent guilt, sending Gertie into a tailspin of drug abuse, shuddering "Dio mio"s, and blood-soaked hallucinations.

Interrupting the unfolding of this as-expected exploitation exercise are scenes of near-Buñuelian absurdity, from the Mother Superior's cheerful exhortation to Gertrude's blatant fiending that it's "nothing but a few sinful thoughts," to Sister Gertrude reading explicit descriptions of sadism from Tortures and Torments of the Christian Martyrs while the patients slurp unbothered at dismal soup. The film's only instance of sober interior monologue reveals Gertrude casually sizing up the men surrounding her on a jaunt into the city for drugs and strange sex, including such gems as "This Nordic-looking one is much more like it" for a fellow whose beard is completely unacceptable. And this is all before a particularly-unconvincingly-dubbed Joe Dallesandro saunters in, who we are meant to believe is not only a doctor, but the voice of reason sent to put a stop to all this madness.

Delightfully bizarre and exceedingly watchable, and bearing the always-intriguing distinction of being a "video nasty" only released uncut in 2006, Killer Nun screens at Alamo Drafthouse as a part of “Weird Wednesdays” with an introduction by writer Tenebrous Kate.