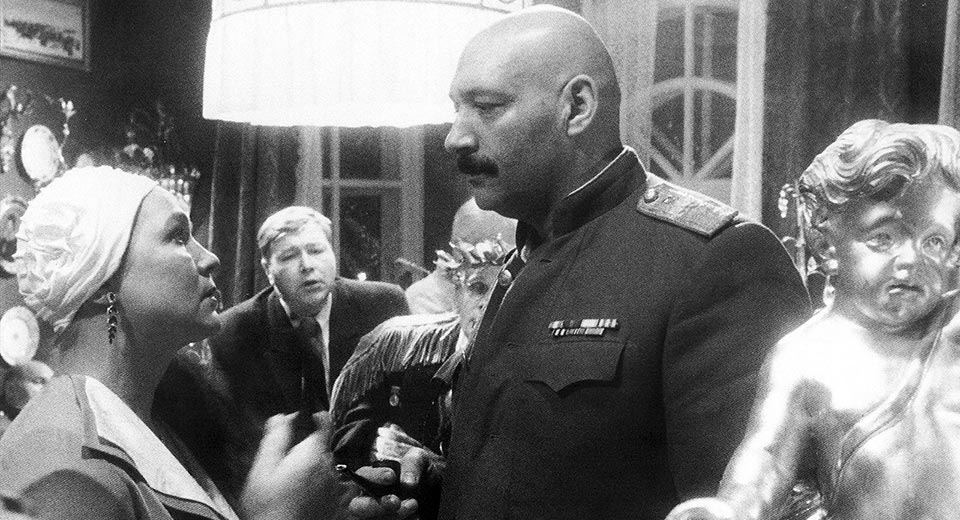 Set in 1950's Moscow amidst the Doctors' plot purges on the eve of Stalin's death, Aleksei German's Khrustalyov, My Car! (1998) pedantically recreates the minutiae of the day in a chaotic mood piece that is a far cry from the hollywoodized melodrama common to many historical epics. While the film is ostensibly about a brain surgeon, Yuri, fleeing the KGB before miraculously winding up at Stalin's death-bed, what transpires in front of the camera can be so exhaustively difficult to follow that it verges on the delirious.

Shot in high contrast black and white - German would claim that memory is never in color - the camera constantly careens around the set, always panning up and down, bent on catching every inane aside that frets along just offscreen - a kid crawling around a party yelling "once a dumb Americanus, stuck a finger up his anus!", a cat whirling through the air on a zipline as Yuri argues with his wife, a million busts of Joseph Stalin watching over all. Amidst all this lurching momentum, German stuffs the film with vast amounts of esoteric period details that are often times as important as they obscure, like the man wandering the streets at night who is supposed to be a dangerous foreigner because he carries an umbrella in the snow, or when the title is delivered as a throw away line to a character never seen. Add in a large ensemble of Fellini-esque background players, professionals and non-professionals alike, who are given to crashing through the frame haphazardly while staring directly into the lens as an important conversation continues behind their head, and you are left with a maelstrom of images and details that can only be described as phantasmagoric.

By the time Stalin pops up late in the film to flatulate and then die, the momentous historical importance of it all seems almost a non-event, just one more grotesquerie amidst the gleeful carnival of the U.S.S.R.