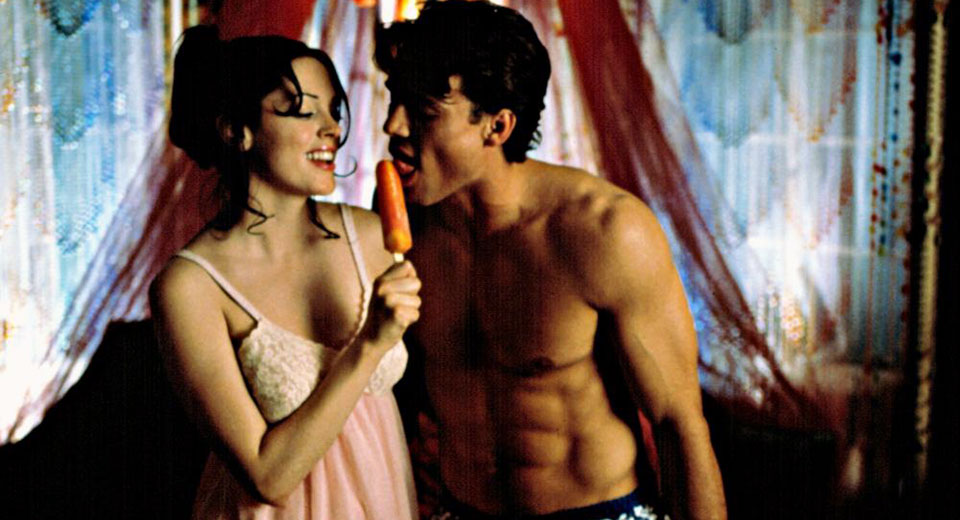 Jawbreaker (1999) is a study of the nature of power relations, a Foucauldian teen comedy that takes positions on sexuality, the criminal justice system, and body image issues. Jawbreaker may be high-key and cartoonish, but, like its namesake confection, it can be a challenge to digest.

Courtney, Marcy, Julie, and Liz are the "Flawless Four," the non plus ultra of popularity at their high school. The leader, Courtney (Rose McGowan), is "like Satan in heels," while second-in-command Liz (Charlotte Ayanna), "the Princess Di of Reagan High," rules with kindness. Marcie (Julie Benz) is Courtney's loyal sycophant, while Julie (Rebecca Gayheart) has an independent streak and is critical of Courtney's leadership. A birthday prank gone wrong leads to Liz's death—asphyxiation by jawbreaker—and the remaining three have to do everything they can to cover it up. The crew's internecine quarrels build toward a breaking point and eventually become a matter of justice for all the oppressed classes in the clique struggle (the goths, the geeks, and the drama kids) and the tyrant is ultimately deposed.

The start of act two delivers the film's thesis; when bottom-of-the-food-chain nerd Fern Mayo (Judy Greer) discovers the homicide, Courtney spells it out for her: "You know we did it. You heard us. That gives you power, Fern. Power." This discursive power to incriminate has to be neutralized, but instead of cement boots they give Fern a makeover (a classic rite of passage for teen movie heroines since 1978's Grease) and absorb her into their clique, following Sun Tzu's adage to keep your enemies closer. Frumpy Fern metamorphoses into vampy Vylette ("You're extra fancy, you're Vylette"), sporting metallic lycra tube tops and a bleached feathered bob. Here another key aspect of the Flawless Four's governmental reason is revealed: the rewriting of history and the erasure of the past. Like Stalin removing Trotsky and Kamenev from the official photographic record, Courtney erases the memory of Vylette's predecessor, Julie ("From this day on, you never knew her"), as well as her former identity ("There is no Fern"). This favorite technique of despots from Huangdi the Yellow Emperor to Putin works in Courtney's favor temporarily, but soon the Machiavellian "safer to be feared than loved" backfires and Fern and Julie bring her down in a reverse-Carrie senior prom denouement. Courtney's desire for control extends to areas beyond "the crew politics of high school": my favorite scene in the movie has her dominating her hunky quarterback boyfriend (Ethan Erickson), forcing him to deepthroat a popsicle and tell her how much he likes it. He does an admirable job.

Beyond all that, Jawbreaker is also literally about jawbreakers, this perverse bonbon that dares us to hurt ourselves, that announces its cruelty in its very name. A montage of the manufacturing process of jawbreakers and a nightmarish extradiegetic sequence of children licking them reveal that the film's core is actually identical to its surface, namely the mystery of why this awful thing was ever invented. As Detective Cruz (Pam Grier) says, "Pretty fucked up name for a candy, don't you think?"