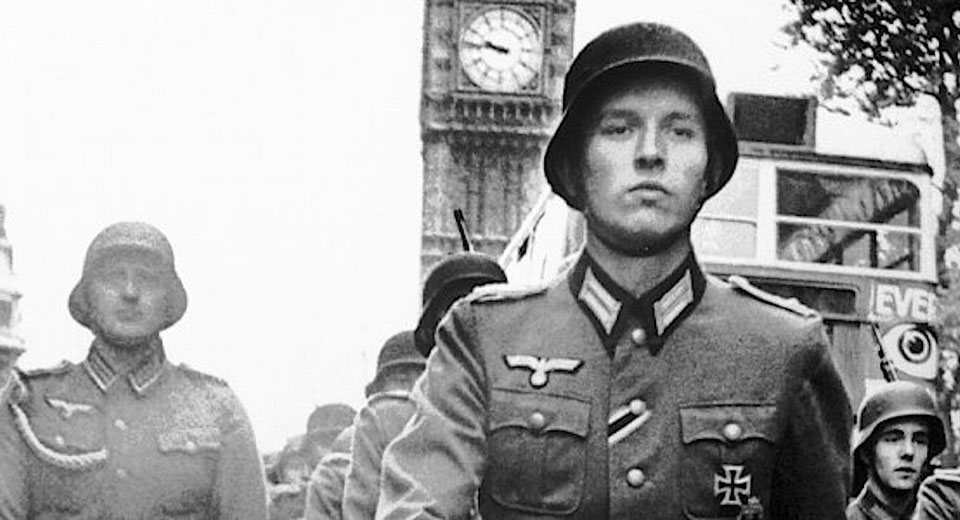 In 1956, two teenagers began the unlikely production of It Happened Here, a shoestring-budget dramatization that imagines a Nazi-occupied England. Kevin Brownlow, a 19-year-old errand boy, enlisted Andrew Mello, a precocious 16-year-old World War II historian, to embark on an experiment in filmmaking that would stretch over the next eight years of their lives. The process would take them from soliciting Abel Gance for advice (Brownlow would later restore his hero's 5-hour silent epic Napolé on), employing British neo-Nazis (in one memorable scene, real-life nationalists and fascists, including Colin Jordan, don Nazi uniforms and expound on their sincere belief in eugenics), and accepting the aid of established filmmakers Tony Richardson and Stanley Kubrick. (The 35mm filmstock was donated from Dr. Strangelove.) In 2003, the Guinness Book of World Records called it the longest production schedule ever.

Brownlow and Mello's travails paid off: the completed 1964 film is not only a testament to its filmmakers' perseverance, it's a compelling study of the banality of evil. Main character Pauline (Pauline Murray) is a well-meaning Irish nurse intent on avoiding all political tension and violence. It's precisely her aversion to conflict that leads her to unwittingly assist in a eugenics project, much to her horror. Her performance is natural, subtle, heart-wrenching, and incomparable—especially given Murray was a first- (and last-)time actress. The film's cast and crew, largely non-professionals and many sourced from science fiction fan clubs and conventions, also come through. The film's best quality is its extreme attentiveness, directed in equal measure to the complexities of its characters' emotional lives and the historical accuracy of their dress and décor.

It Happened Here screens as part of Anthology Film Archives's Inauguration of the Displeasure Dome alongside fellow naturalist depictions of political dystopia, Ice and Punishment Park. At their best these sort of films can remind us of the dailiness of resistance. They should also serve as a model for one type of subversive cinema, to be added to the arsenal of responses to the new administration: dilettante, incendiary, flawed labors of love.