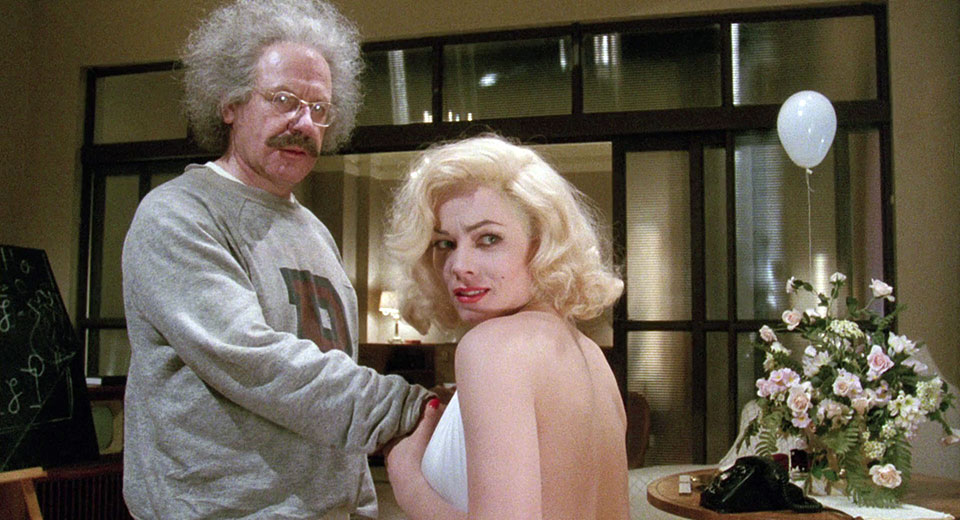 Nicolas Roeg has many talents, but pacing is not one of them. He's pretty good at showing, not telling, tormented psyches. He's good at directing actors in the maniacal sense (pushing them to extremes, casting them against type, pitting them against one another). He's a true master of that fuzzy, yearning, middlebrow cinematic visual style that runs from his early photography credits (Lawrence of Arabia, Dr. Zhivago) to his directorial efforts. He just can’t structure a movie, one of his most endearing qualities... Call it “bad timing.”

Roeg's proud dramatic ineptitude is what makes Insignificance such a pleasure—maybe the most mystifying in his catalog—since it not only mitigates the painful staginess of Terry Johnson’s source material, it also facilitates a quite effective meditation on "cinematic time." Released on the 40th anniversary of the atrocities committed in Hiroshima and Nagasaki, the movie imagines the meeting of Marilyn Monroe (Roeg mainstay and wife Theresa Russell), Albert Einstein (Michael Emil, brother of Henry Jaglom, descendent of Moses Mendelssohn), Joe DiMaggio (Trump supporter Gary Busey), and Joe McCarthy (Tony Curtis in a crucial late career role) over the course of one night in a single hotel room. It's March 1954, the week of the initial tests of the hydrogen bomb at Bikini Atoll, although the 1955 World Series plays on the hotel bar TV. McCarthy suspects Einstein of red sympathies; Monroe escapes the filming of The Seven-Year Itch to pick Einstein's brain; DiMaggio frantically tries to win his wife back.

Roeg's attention-deficit direction saves the film from being a hackneyed alternative history theatre piece. With his help, the movie even transcends simply being a sharp study of American myth and power. The sum of Insignificance—its late Cold War apocalypticism, its time-space continuum navel-gazing, its soft-rock opening credit music, its performances, its tragic sense of American life, its sly evocation of Reagan—is greater than its parts. There are few films as confounding or as spellbinding in Roeg's filmography or otherwise.