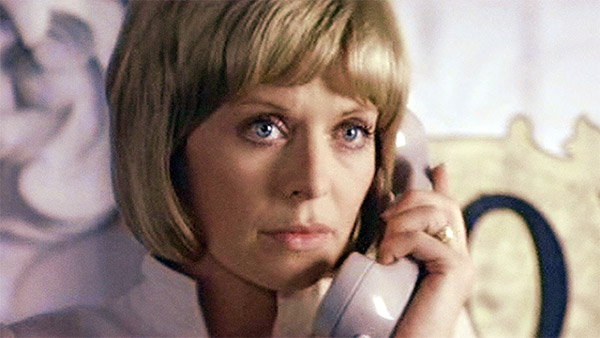 Robert Altman’s initial idea for Images was based on a simple scene: “A husband and wife are having an argument, and he is going in and out of the bathroom. At some point she looks up, and he is someone she has never seen before.” Images is one of only two of Altman’s films that he wrote from scratch, the other being 3 Women, and along with A Cold Day in the Park, are the most concerned with the inner lives of its characters, women specifically. Altman called Images one of his “interior” films, and his approach to his own material in this case is remarkably intricate, a carefully escalating counterpoint to his more freewheeling ensemble films.

Cathryn (Susannah York) is a woman with a haunted mind, a children’s book author whose face registers calm only when the book she’s writing is running through her head. In voiceover, we hear disjointed sections: “She knew that the little blue bird had always been a part of her, lodged inside her since she began. The pain of being without it was too much to bear.” The text is Susannah York’s; she was writing a children’s book called In Search of Unicorns at the time of filming and Altman integrated her book into the script. Cathryn’s words attain a stream of consciousness-like urgency as she encounters herself, a dead lover (Marcel Bozzuffi) and other apparitions and struggles to keep her grasp on reality.

Altman called Images “kind of a standard schizophrenic story”, though in fact the film dives into a wide-open plain of female despair, loneliness and fear, complicated by unwanted sexual advances and ambivalence about motherhood. After a frightening episode at their city apartment, Cathryn and her juvenile husband Hugh (Rene Auberjonois) retreat to Green Cove, the isolated country house where Cathryn spent a lonely childhood “telling herself stories”. Hugh is a photographer who is largely oblivious to Cathryn’s unspooling mind and whose camera and its spare lenses, and even his eyeglasses, are a sinister anthropomorphic presence. Cathryn fends off her dead lover who is not really there, her lecherous neighbor (Hugh Millais) who is sometimes really there, and her husband, who she begins to confuse with the other two men. When she can, she retreats into the book in her mind, mouthing it to herself.

Stomu Yamashta’s homemade percussion instruments provide the sound for the many wind chimes and fragile glass ornaments that hang inside and out of Cathryn’s home and even her car, rankling nerves and forecasting disaster (“and all around her in the night teeth snapped like scissors…”). John Williams’ score is interpolated by Yamashta’s free fall of sound in an echo of an alternatingly unstable mind. According to Altman, “What we have to say is serious as long as you don’t take it seriously.