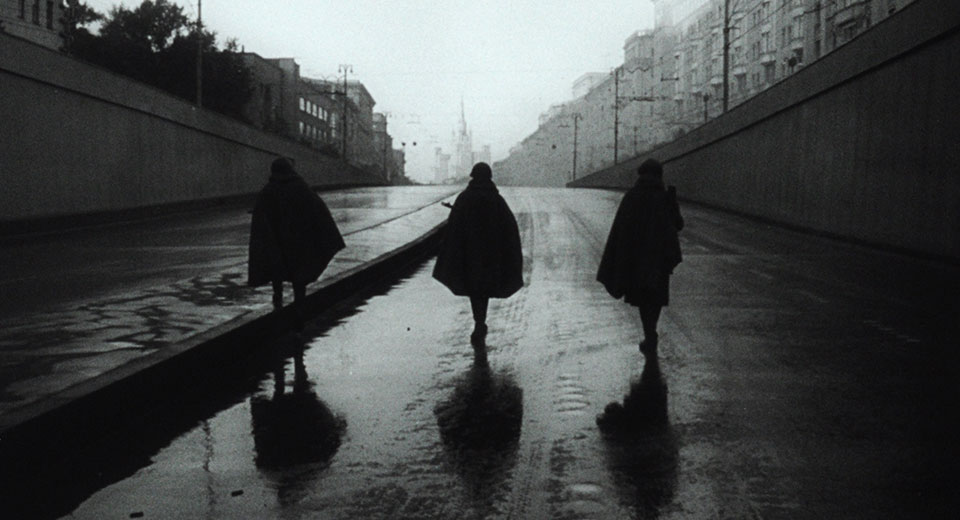 There is no question in Marlen Khutsiev's mind that Ilych's Gate and I Am Twenty (1965) are separate films. That being said, they might be fraternal twins: Ilych's Gate was massively edited at the demand of Nikita Khrushchev upon its completion in 1962 due in part to the fact that the film's youths worry about economic opportunities and dance to rock 'n' roll. A moral outrage.

But Ilych's Gate is hardly a film of dissent. If anything, it is firmly and proudly a Soviet movie, following three boyhood friends of the "fatherless" generation who are actively seeking to shape their own lives and identities. Like the New Wave films being directed worlds away in Europe around the same time, this search takes the young men to museums, poetry readings, and philosophical parties, with lots of gallivanting about on the streets in between. But for Khrushchev, who eviscerated Ilych's Gate at a speech at the Kremlin, the characters were "not fighters, not remakers of the world. They are morally sick people."

In Khutsiev's opinion, of course, that was not the case. Khutsiev was about a decade older than the characters in his film, and he found his young protagonists—many of whom were non-actors played by the intelligentsia themselves—to simply be ignorant of Joseph Stalin, having been just toddlers during the height of his cult of personality. But crucially, Khutsiev idealized Stalin as the man who won the war. One of the sobering final shots of the film lets this simmer.

But if history and politics are not what excite you (or if you are simply weary of them this third weekend of October), then Ilyich's Gate has plenty of other pleasures to offer a viewer: gorgeous cityscapes of bustling Moscow, a lovely little romance, a stirring chiaroscuro dream sequence. Oh, and a young Andrei Tarkovsky, in the role of a minor character, getting slapped across the face at a party.