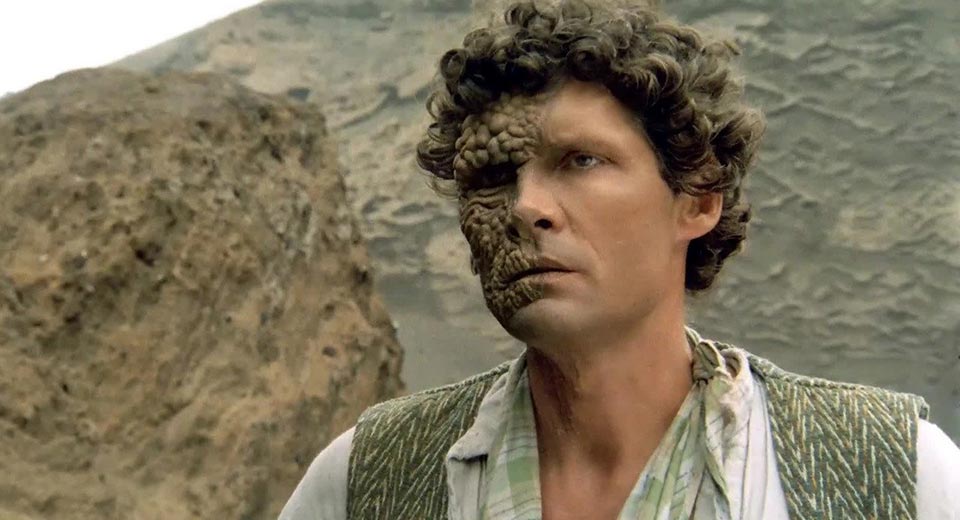 Based on a novel based on actual events, Monte Hellman’s Iguana (1988) mythologizes the exploits of disfigured sailor Oberlus (Everett McGill) who literally wages war against mankind in retribution for a life of persecution. Forsaking kinship with mankind, he establishes a fiefdom on a deserted island, enslaving the unfortunate souls who wash up on his beaches.

His face is half-covered in lumps and reptilian scales, hence the titular nickname. Despite remarkable skills as a harpooner, he’s despised by the crew, both for his repellent appearance as well as his interest in sorcery. After escaping execution, he finds refuge in a cave on a small island. When he fails to conjure a zombie to execute his vengeance, he swears off magic for a more earthly recompense. In a striking stretch of dialogue, he vows allegiance to his personal law alone, which consists of absolute authority over his rock-strewn island. He captures and shackles marooned sailors, forcing them to fish and cook for him. When a lady picnics on the island with her betrothed, he kills the fiancee and takes her as a sex slave. He proudly becomes the self-proclaimed master of five starving slaves and a barren island, hoisting a flag emblazoned with an iguana.

The central, unanswered question concerns the source of his despotism. Did society create this monster, or was an evil man merely born disfigured? Oberlus himself is strikingly full of self-pity, feeding his Shakespearean grandiosity. At one level, Hellman approaches this character as a mythic god, prone to cruelty and eager to espouse his divinity. His casual rape and murder wouldn’t feel out of place in Bulfinch’s Mythology. But simultaneously Oberlus seems utterly human as he reels from persecution. In such moments he’s an exceedingly small man who’s made himself lord of his world.