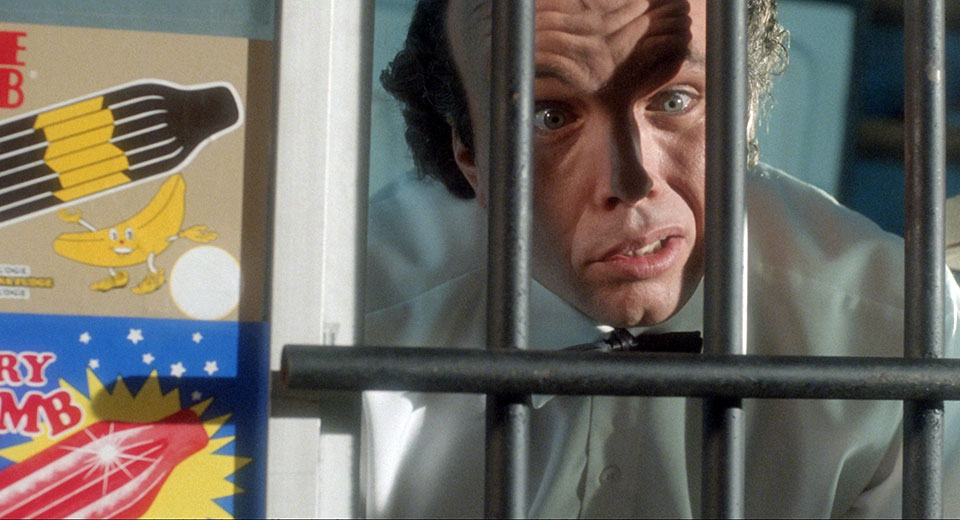 The direct-to-video pseudo-slasher Ice Cream Man (1995) looks and sounds as though it were ripped straight from the margins of a fifth grader’s notebook. Like a doodled version of an R-rated movie, it’s soaked in blood without the more deeply disturbing presence of viscera and anguish. It takes place entirely underneath the low ceiling of a pre-internet prepubescent’s morbid imagination, and that’s the source for much of its charm. Its sense of wickedness is muted and silly, like a weird, wonderful and occasionally quaint trip through the mind of a ten year old, only it was directed by an AVN Award hall-of-famer and scripted by the man who would one day bring us Wedding Crashers.

In one of his precious few starring roles, Clint Howard plays Gregory Tudor, the scowling driver of an ice cream truck prowling a nondescript stretch of suburbia. After witnessing the gang-style execution of his idol and predecessor, The Ice Cream King, a young Gregory was institutionalized at Wishing Wells, a loopy psychiatric hospital where doctors ensure “happy, happy days” by injecting green goo into patient’s brains. Flashback sequences detailing the treatment have an untapped satirical foundation concerning unconventional psychotherapies, but the cartoonish quality of Wishing Wells is nonetheless delightful.

Upon his release Gregory christens himself The Ice Cream Prince and takes up his fallen hero’s route selling “sweet treats”. Heralded by the truck’s awful tune, he glares at his young customers through unsubtle metal bars, snarling demands for “please’s” and “thank-you’s” during each transaction. He soon begins killing locals and adding them to his product, escaping suspicion from all but a group of kids who organize themselves into a walkie-talkie-using, beret-wearing paramilitary outfit. A fifth grade solution to a fifth grade fantasy.

Director Norman Apstein was better known as Paul Norman, prolific helmer of hundreds of adult movies in the VHS era, perhaps most notoriously Edward Penishands. Ice Cream Man is Norman’s sole non-porn credit, an unfortunate reality considering the film’s unique, kooky tone. This is no “bad bad” movie. Instead, it’s an intentionally silly romp full of treat-themed one-liners and cartoon violence. The most shocking thing about Ice Cream Man is its sweetly innocent approach to the slasher film.