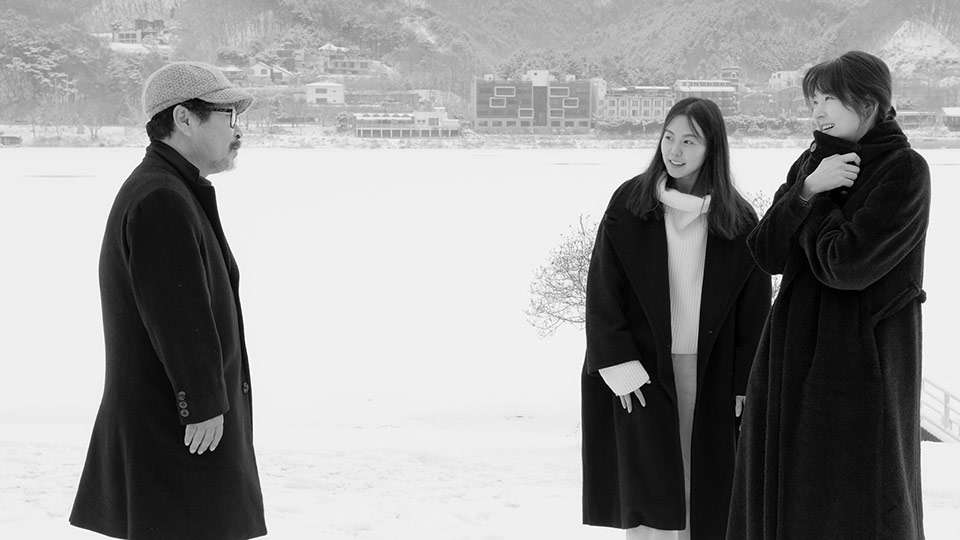 The nature of South Korean director Hong Sang-soo’s creative process doesn’t lend him much time for introspection. When preparing to make a film, he gathers actors to drink and talk about “what they do, how they are doing… because I don’t know what I will shoot, we rarely talk about the film,” he said at a Film at Lincoln Center interview. The morning before shooting starts, Hong writes that day’s script. The festival-circuit favorite must be doing his contemplation at a record pace, because Hong’s Hotel by the River (2019), streaming on Kanopy, is his most sensitive, self-critical film to date.

Hong is playing with elements that are familiar to fans of his expansive filmography. Two brothers (Kwon Hae-hyo and Yu Jun-sang) travel to meet their distant father (Ki Joo-bong), a famous poet, at a fading hotel in a resort area outside Seoul. There, they have brief encounters with two women staying in the same hotel (Hong’s current lover and muse Kim Min-hee and Song Seon-mi), one of whom (Kim) is struggling to overcome the end of her relationship with a man who remains off screen.

It’s all standard Hong fare: the younger, more elegant brother is a filmmaker of note, if not artistic merit, and his elderly father is a wistful, hard-drinking romantic who never had much concern for his family. The stark, snow-covered landscape of the Bukhan River is complemented by Kim Hyung-ku’s black-and-white cinematography. It’s an improvement for Hong — there’s something pretty to look at besides the people, for once — but his visual style remains unfussy.

The real jump is in the attention he shifts away from his inconsiderate protagonist, the elderly poet, and toward his sons, the victims of his neglect. As the brothers take swipes at one another, and, eventually, at their father, the viewer is invited to contemplate the consequences of male immaturity through the spare conversations shared by their female counterparts.

Hong’s been embroiled in a years-long scandal played out in the Korean press over his affair with Kim and court battle to divorce his wife, and in Hotel By the River he finally seems to admit remorse. Hong moves beyond the playful self-deprecation of earlier films to an examination of the pain selfishness can wreak on others. If he used to laugh at his drinking and infidelity in previous films, the Hong who made Hotel by the River appears closer to crying. The whole film feels so well considered, such a leap in self-awareness over his earlier work, that one can’t but be excited to see how Hong will continue tinkering with his formula into the future.