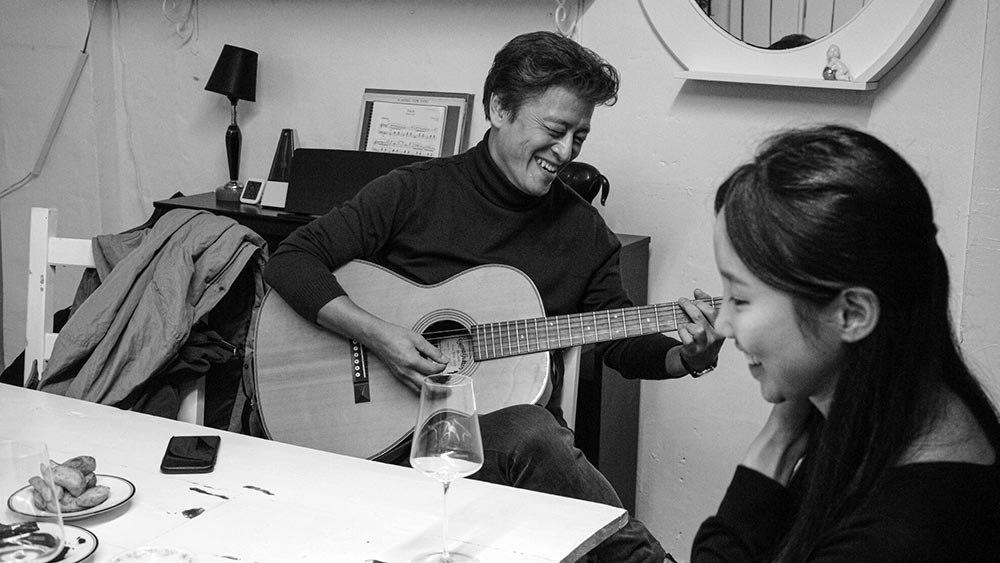 Funny that the two films of Hong Sangsoo’s now-traditional New York Film Festival coupling complement each other, as if the South Korean director not unreasonably anticipated they would be seen together. In Walk Up (2022, pictured at top), a director (Kwon Hae-hyo) visits a multistory apartment building owned by an interior decorator, Ms. Kim (Lee Hye-young)—an acquaintance of murky provenance who he hopes will apprentice his adrift daughter (Park Mi-so)—and never leaves. We witness the minor moments of life transpire, with jolting elisions of major change, within the setlike confines of basement, intermediary floors, and balconied attic, the last of which seems to represent an airy province of ideal creation (at least in English, walk up is a noun as well as a verb—an imperative). The outside world permeates the frame only through interior effects: bowls are poised to catch the water from a leak above; and the departures of women (daughters, lovers, landlords) from the director’s view also cut short their story lines. In the first of the rambling table talks common to Hong’s films, the daughter slyly teases the differences between her famous father’s so-called authentic self inside their family domicile and the grandstanding persona flaunted outside. More familiar with how often and how seamlessly homes are staged, Ms. Kim wonders aloud whether both selves might be true.

The spatial counterpart to Walk Up, in which characters can move only up or down, might be titled Walk Around. When Jun-hee (Lee Hye-young), the writer at the center of The Novelist’s Film (also 2022), ventures outside her native city to clear a ponderous block, her chance encounters—enabled in part by her ever-roving, capacious curiosity—culminate in a clear creative act of unclear value. At one point, Jun-hee meets Hyunwoo (Park Mi-so), a quiet actor learning sign language, and delights when she translates a sentence about enjoying the beautiful weather by strolling outside. Of course, sign language, like film, is a pictorial, movement-based representation of words; we could almost call it silent cinema. Perhaps we can already see the film that Jun-hee later proposes taking shape—but isn’t that the nature of artmaking? Signs, encounters, dialogue, coincidences, images, and gestures accumulate, inscribed with meaning only in retrospect. Jun-hee confesses her weariness over needing to inflate “small things into something meaningful” in her writing, and maybe things should be permitted their modest thingness. But it’s not the artist but the interlocutor, the viewer—in the sign-language scene, herself—who must be enchanted by what is there.

Both The Novelist’s Film and Walk Up are populated by lapsed painters and actors, filmmakers who fret over attending post-retirement retrospectives, a garreted artist whose rent payments prove erratic, a poet whose fire has fizzled out, a director (Kwon Hae-hyo, again) accused of prioritizing profit, and a former author who runs an outlying bookstore after divesting from the cosmopolitan scene. Neither film details the technical process of creation. Art might be the invisible thread that entangles and tugs at the characters, but most of human existence, Hong suggests, is swarmed with petty domestic friction, financial woes, fleeting camaraderie, and outpourings of thwarted dreams over tables littered with bottles of wine or makgeolli. In one stirring scene in The Novelist’s Film, Jun-hee unleashes a strident rant defending a nonworking actor, Gil-soo (Kim Min-hee, whose own career stalled after the public reaction to her affair with Hong), who a director has attempted to compliment by mourning her squandered talents. The tirade, a projection of Jun-hee’s own fears that she holds no worth outside her work, nonetheless asks a vital question: has the artist failed when they have turn their attention to a life well lived?

Hong has directed twenty-one films since 2009, elaborating the script each shoot day, meaning his actors must respond to the material offhand, as they go; and their repetitions, reversals, parallels, and in-jokes accrete slight gestures into a miniature universe. Not a body of work—a body, working. Earlier this year, critic Richard Brody described Hong’s method as “not a means but an end in itself .‌ . . the eternal present tense of creation.” Does the process justify the art? All we glimpse of what we take to be the novelist’s film (though it could be Hong’s own) is some shaky, sometimes unfocused camera footage of Gil-soo gathering wildflowers (which, at her request, shifts from black-and-white to exuberant color)—spare yet sincerely tender. She exchanges words of love with the cameraman, unquestionably Hong, who Min-hee first collaborated with on the set of Right Now, Wrong Then (2015). The credits roll, but this is not the end. Gil-soo emerges from the theater where she has been watching the movie and finds herself alone. She seems lost, at first, before deciding to go upstairs (Up!) to the roof. Awaiting her are a new friend, conversation, the sky. If these are the “smallest things” given to us, who could claim that life is not enough?

The Novelist’s Film screens tonight, October 7, and on October 10, at the New York Film Festival, the film’s US premiere. A theatrical run at Film at Lincoln Center begins October 28.

Walk Up screens tomorrow night, October 8, at the New York Film Festival, having had its US premiere there last week. 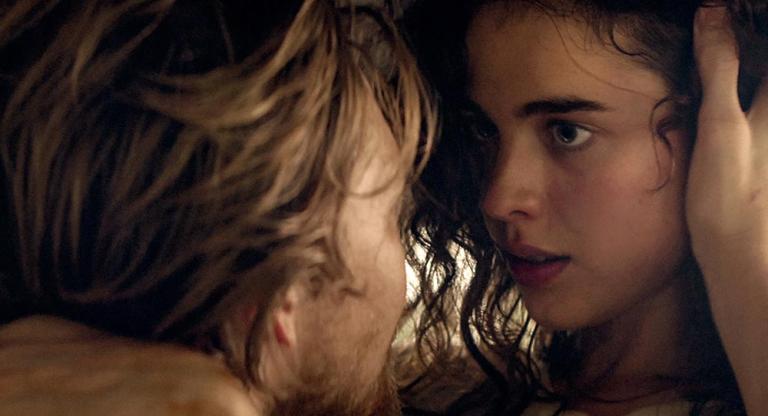 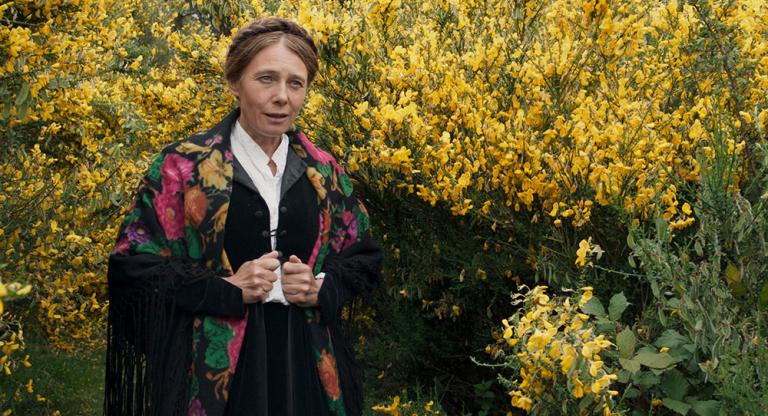 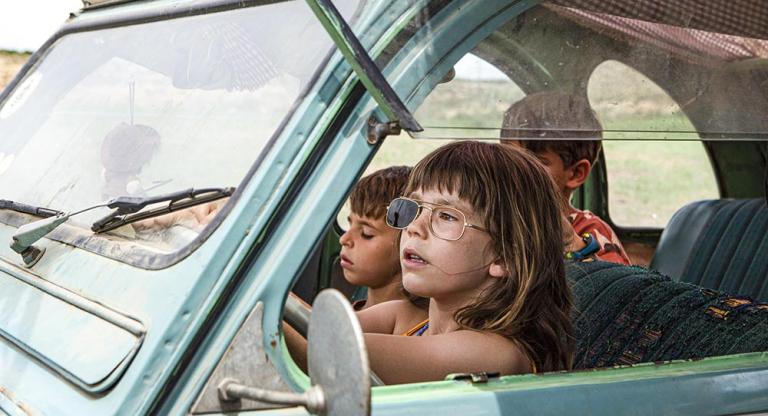