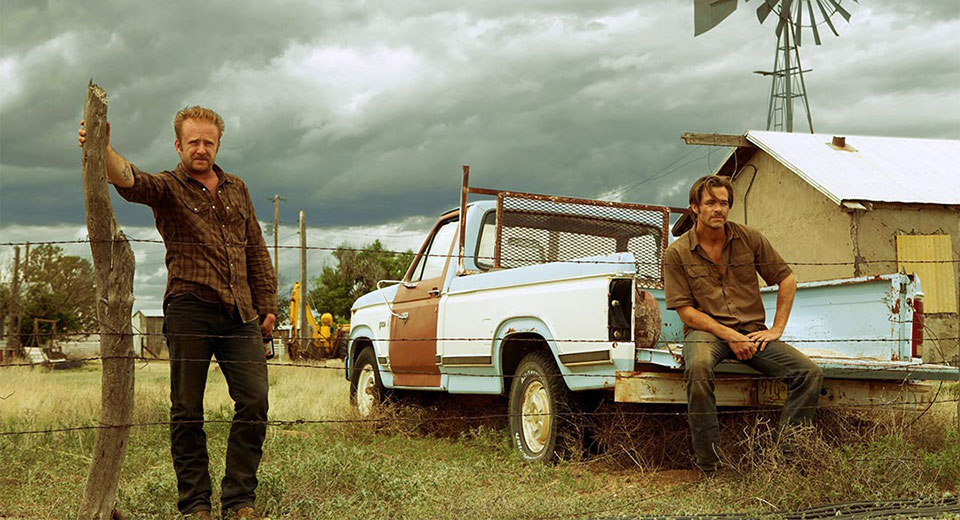 David Mackenzie’s Hell or High Water (2016) is the Bonnie and Clyde of the Great Recession, a history lesson and populist fable with a mandate to bash the banker crooks who have been robbing us long enough.

Toby (Chris Pine) and Tanner Howard (Ben Foster) are brothers living at their recently deceased mother’s ranch in impoverished rural Texas. The remaining $43,000 mortgage on the barren property makes for a tight spot; Toby has to pay child support and Tanner’s just done ten years. Solution: pay the creditors back with their own money. So the brothers set out to rob several small-town branches of Texas Midlands Bank with nothing but a couple hoodies and ski masks and several pilfered “real piece of shit” cars they’ve stashed in the barn. Nobly, they’ve decided against killing and taking money from account holders.

Soon-to-retire Marcus Hamilton (Jeff Bridges) and his half-Comanche partner Alberto Parker (Gil Birmingham) are the Texas Rangers sent to play cat-and-mouse with the Howards. The Rangers’ master-apprentice dynamic is tinged by Hamilton’s charming old-timey racism, with jabs like “I’ve got a half-breed by my side to avenge me—if you can stay sober long enough, considering how much you injuns like to drink.” The dispossession of Native Americans is a running theme: when a Comanche gambler informs Tanner that the name of his tribe means “enemies forever,” the latter responds, in a gesture of solidarity, “You know what that makes me? A Comanche.” Even Alberto perceives this commonality; he recounts how the palefaces who stole his ancestors’ land 150 years ago are in turn being expropriated, “except now it ain’t no army doing it. It’s those bastards right there,” pointing at the Texas Midlands branch he’s supposed to be protecting.

Regular Americans in the films of populist directors like Nicholas Ray were always intuitively anti-authoritarian, offering whatever protection against the law they could to the down-and-out, and Hell and High Water continues this tradition. When asked how long he’s been at the diner across the road from a crime scene, a cowpoke responds, “Long enough to watch a bank get robbed that’s been robbing me for 30 years,” and a scofflaw waitress refuses to hand the Rangers the $200 Toby left on the table (“It’s evidence if they’re robbers—until then it’s my tip”). Even Marcus has no love for bankers, pointing out a well-fed branch manager with “That looks like a man who can foreclose on a house.”

While not heavy-handed, Hell or High Water's political analysis is clear; depressed rural landscapes are dotted with billboards offering easy loans to subprime borrowers, characters recognize the social causes of crime in the changing economy (e.g. fossil fuel companies downsizing), and everyone’s got a mortgage they’re scrambling to pay back. Debt is the name of the game here, and the Howard brothers know how to twist the rules to win it. When Tanner goes on a suicide mission to lure away the heat after their last job, the brothers cut off their final embrace with a mutual “Go fuck yourself,” eliminating the symbolic debt between them and confirming that their fraternal love doesn’t mean they owe each other a damn thing.