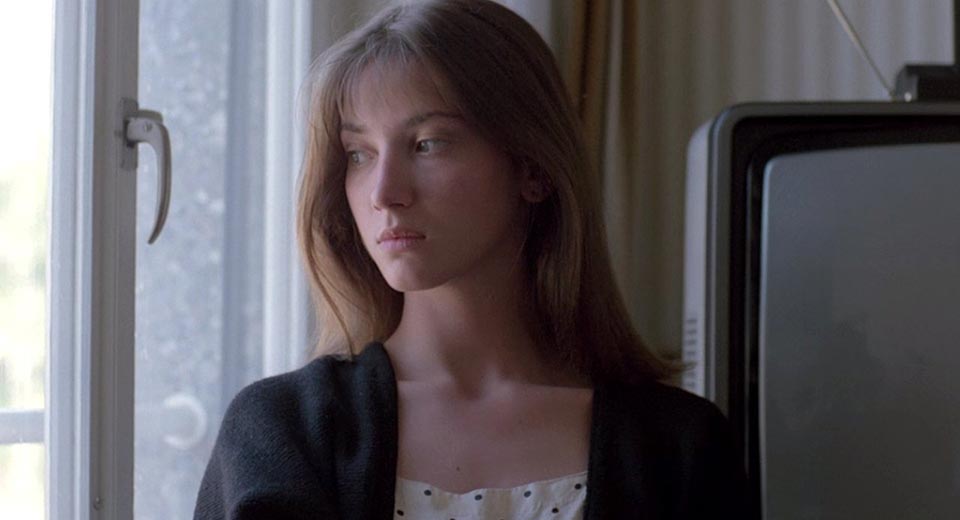 Hail Mary is always labelled Jean-Luc Godard’s most “controversial” movie. But why? Did the Pope denounce it on the radio and Catholic groups protest outside movie theaters because of Godard’s exclusive use of the music of Bach, the Protestant composer? Hail Mary features so many of the master’s organ masses and chorale harmonizations, his violin concertos and piano sonatas, that Godard could describe it as a “documentary” on the baroque composer’s work, adding it to the list of Bach biopics by francophone avant-garde filmmaker couples (which previously included only Straub and Huillet’s The Diary of Anna Magdalena Bach).

In the 1980s, Godard tried to ditch the “vertical” approach to sound (in which distinct layers of sound—music, dialogue, and natural sound—run alongside and separately from one another) in favor of a “horizontal” one, which would combine these three registers into “one general speech.” Breaking the flow of sounds we’re used is not an arbitrary avant-garde flourish but an attempt at fuller emotional resonance. For example, Mary is playing basketball when suddenly the sounds of the game disappear and only the choral music continues; we share her experience of detaching herself from her surroundings, contemplating the brouhaha with an incongruously solemn inner soundtrack. It’s a feeling of dissociation that we’ve probably all had when we wished we weren’t there.

Bringing the story of Mary, Joseph, and the birth of Jesus to the screen in a contemporary setting had nothing irreverent or iconoclastic about it. Godard confessed in an interview, “I think we need faith, or I need faith … maybe I needed a story which is bigger than myself.” Joseph is a cab driver (the modern equivalent of a shepherd?), Mary works at a gas station (did the biblical Mary work?), and the angel Gabriel has a niece who’s constantly reminding him of his lines (one of the film’s only blatantly postmodern gestures). Like in so many Godard films, the dialogue consists mostly of aphorisms that have less to do with what the characters are doing than with whatever they might be reading at the moment: the line “I must learn to write, if I want to forget” echoes Socrates, while “Politics today must be the voice of horror” sounds like Orwell.

BAM ’s series honors Anne-Marie Miéville, a close collaborator of Godard’s from the early 1970s on. In her 22-minute prologue, Book of Mary , a middle school-aged Mary dances to Chopin and Mahler in a drab bourgeois apartment and quotes Baudelaire and Holderlin. It’s stylistically similar to Godard’s films from the period, dominated by static medium shots and featuring disembodied dialogue on abstract subjects between a man and a woman. The color palette is so muted (mostly shades of cream, beige, and chestnut) that I’m tempted to coin the term “brownscale.”