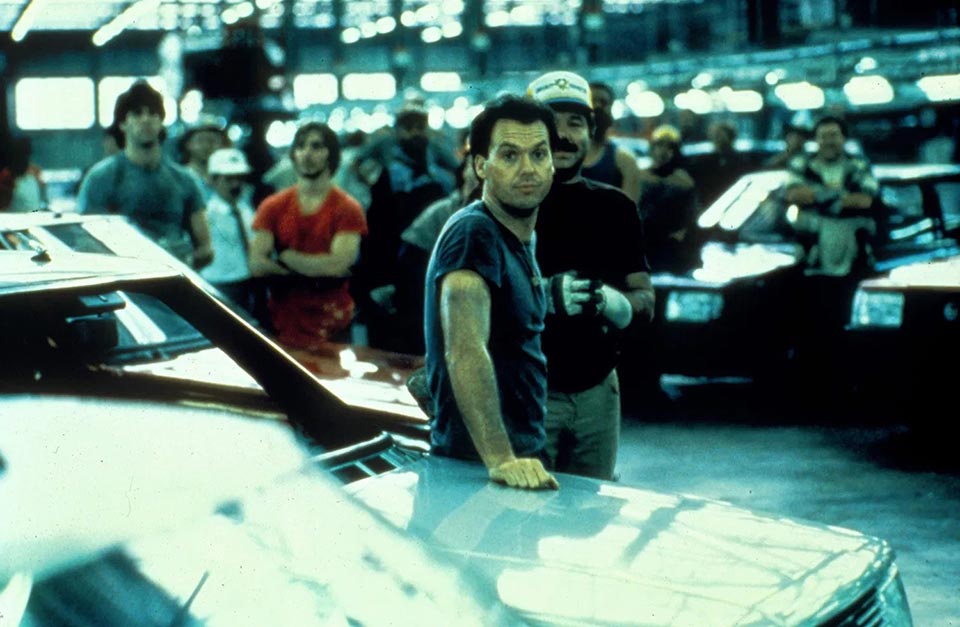 French theorist Jean Baudrillard once noted, “driving is a spectacular form of amnesia. Everything is to be discovered, everything to be obliterated.” One of the things obliterated is the labor sunk into the commodity itself. We remain only dimly aware, at best, of the labor necessary to create such commodities that provide us the experiences about which Baudrillard opines. It’s commodity production, and the real fears of those selling their labor, that lies at the heart of Ron Howard’s 1986 film Gung Ho.

Against a backdrop of de-industrialization and Japanese car manufacturers opening U.S. factories to avoid protectionist quotas — euphemistically called “voluntary export restraint” — Gung Ho follows Hunt Stevenson (Michael Keaton), an auto factory foreman tasked first with wooing Assan Motors to save the fictional Hadleyville, Pennsylvania auto plant. As part of this effort, he’s tasked with liaising between the American workers and their new Japanese managers, including Takahara Kazihiro (Gedde Watanabe) an Assan executive given one last chance to prove his worth as a manager.

The miscast Keaton plays Stevenson as a gentile Billy Crystal, all nervous energy and one liners that never land. Keaton’s levity undercuts the seriousness of the milieu as the UAW failed to protect workers and states one after another became right-to-work enthralled by East Asian management strategies.

The clashes between labor and management — many on the realistic factory floor and heightened by the townspeople’s brash xenophobia and latent jealousy at Japan’s ‘80s manufacturing success — are the realest moments of the film. Most notable is a grocery store brawl between Hunt and a drunk Buster (George Wendt) who’s been humiliated on the factory floor. It’s a prefigurement of the classic fight between Keith David and Roddy Piper in They Live. Here, just at most points in the film all the class traitor Hunt can muster is “I’m sorry, man.”

One sees what could have been had Howard delved deeper into the contradictions of remaining true to fellow workers while having the pressures of keeping the plant open under untenable working conditions. Howard also shies away from the patriarchal Hunt’s treatment of his girlfriend, Audrey (Mimi Rogers). Instead, Howard didn’t know if he was making a comedy or a drama, and it ends up being neither, despite so many of the requisite parts and some affecting cinematography and mise-en-scene, especially when in the hustle and bustle of the factory and any scenes involving large crowds, such as the union hall and the softball game between workers and management.

If this all sounds familiar, one may be thinking of the Oscar-winning American Factory. It’s an odd thing to watch the two films back-to-back. It’s been alleged that Toyota has used Gung Ho as a training model on how not to manage Americans, and one wonders if Fuyao executives got a screening themselves.