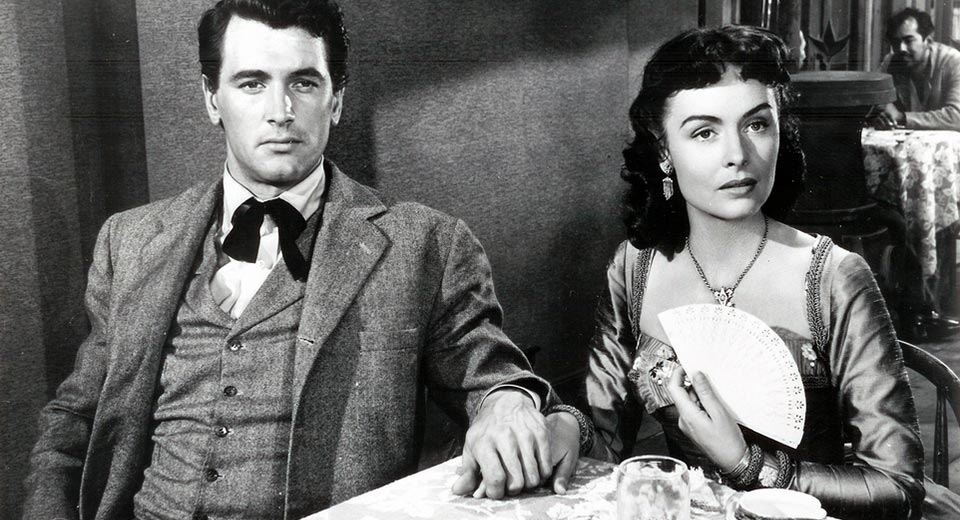 In Raoul Walsh's 3D post-Civil War romp Gun Fury (1953) history is as much on the surface as everything else. It's thrown straight at you just like the stereoscopic punches and knives.

The Slayton gang menaces Arizona, robbing stagecoaches and disappearing into the desert. But as their leader Frank Slayton (Phil Carey) is constantly at pains to emphasize, not just any stagecoach will do; they're robbing Northerners exclusively, because—like the overzealous Japanese soldiers who refused to believe that Hirohito had surrendered and continued waging war in the Pacific—the war between the states is only over for the victors.

Southern belle Jenny Ballard (Donna Reed) is traveling to California to settle on a farm with her beefy fiancé Ben Warren (Rock Hudson). Slayton meets her en route and, with suave rebelliousness, introduces himself as an "unreconstructed Southerner." His sights are set, his intentions less-than-pure. His right-hand man and externalized conscience Jess Burgess (Leo Gordon) reminds him of the justness of their cause and the damage Slayton does to it by frequently kidnapping women for sex-slaves. The set-up is obvious: the conflict will be between the evil rapist Slayton and the simple and wholesome Ben, with Jess acting as his defector-advisor and Jenny as the passive object-trophy.

Over a tense, faux-civil game of cards, Slayton and Ben spar over the significance of the Civil War. "I saw a world die—my world" says Slayton, while Ben naïvely expresses his revulsion towards "violence and force." For Slayton, defeat doesn't just mean going home, because there is no home left to go to. The South has become "A land of three armies: an army of mourners, an army of cripples, and an army of thieves," Slayton's gang being a mixture of the first and third of these.

The men in Walsh's films are hard-drinking and straight-talking, while the women gossip, faint, get lassoed, and wait to be rescued. Jess's opinion of women is that they're all the same, "they just got different faces so you can tell 'em apart." The gang debates how they'll split up Jenny—as "part of the take"—among themselves, and settle on "share and share alike." The Technicolor vistas distract from the violence of these attitudes, the gang's profoundly misogynistic banter serving only to establish them as the bad guys.

For all the usual problems associated with what one might call "unreconstructed Westerns"—all those made before the genre started to be revised in the 1970s—Gun Fury is an adventure rich in history and packed with folksy wisdoms like "A man's gotta do his own growing, no matter how tall his father was." Don't expect Little Big Man and you won't be disappointed.