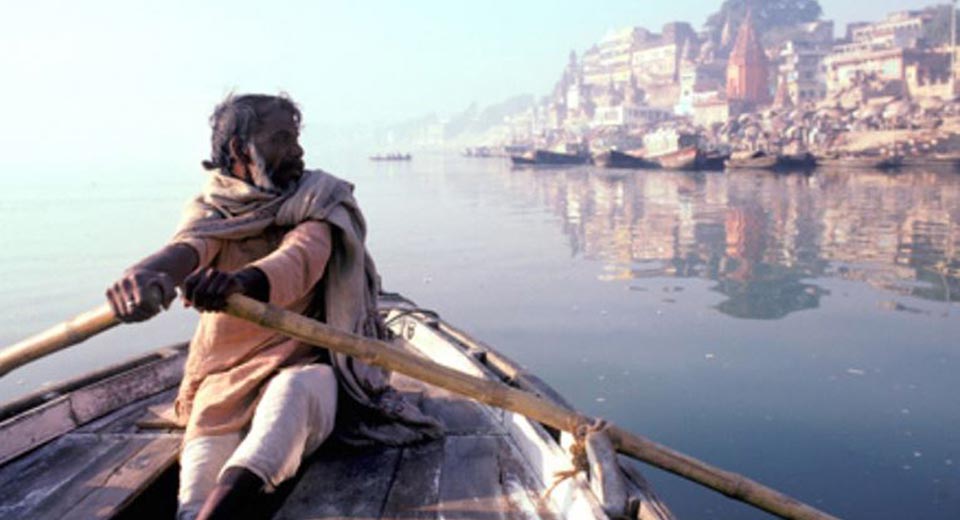 Screening this afternoon at the Museum of Modern Art as part of its recent acquisition series, Forest of Bliss will continue to confound and divide. Filming over the course of several weeks in 1985, Robert Gardner observed religious rites along the Ganges river in Utter Pradesh: the city of Varanasi, the supposed "microcosm of India," revered as a sacred site of death and redemption in Hindusim.

"There is no excuse for a 1920s movie in 1986," went one particularly damning review from cultural anthropologist Alexander Moore, chiding the film for its refusal to subtitle, dub, caption, or straightforwardly editorialize the footage or dialogue. Indeed, it is cinema's fourth decade that filmmaker Gardner seems to model himself after, looking to city symphonies, Jean Vigo, Kino-Pravda, and especially Robert Flaherty. Eschewing the terms "ethnographic film" and "documentary" in favor of the ambiguous "non-fiction film," Gardner chose to sidestep usual questions of anthropological objectivity, instead pursuing a lyrical cinema somewhere between scholarship, travelogue, and experimental film. Here he foreshadows the now-ubiquitous "autoethnography" and lays the groundwork for the Harvard Sensory Ethnography Lab.

While some scholarly disputes gradually fade into historical footnote, the conversation around Gardner's approach has endured. Five years ago, a panel discussion at UnionDocs yielded a back-and-forth as polarized as the film's initial reception. Does Forest of Bliss's commitment to non-translation abate or advance the colonial encounter? How should we feel about Gardner's title card locating the film in Benares (the colonial British name) rather than Varanasi? There's no question that the film mystifies, but to what degree and to what effect?

The late Stanley Cavell (Gardner's Harvard Film Archive co-founder) once wrote that the film "is not unlike the power Plato credited Socrates with bringing to philosophy, the power to make its presence felt by numbing its recipient, stopping thought, showing philosophy to begin by showing that you are unprepared for it." Forest of Bliss is rich as a filmic case study, certainly—but it also overwhelms and fascinates.