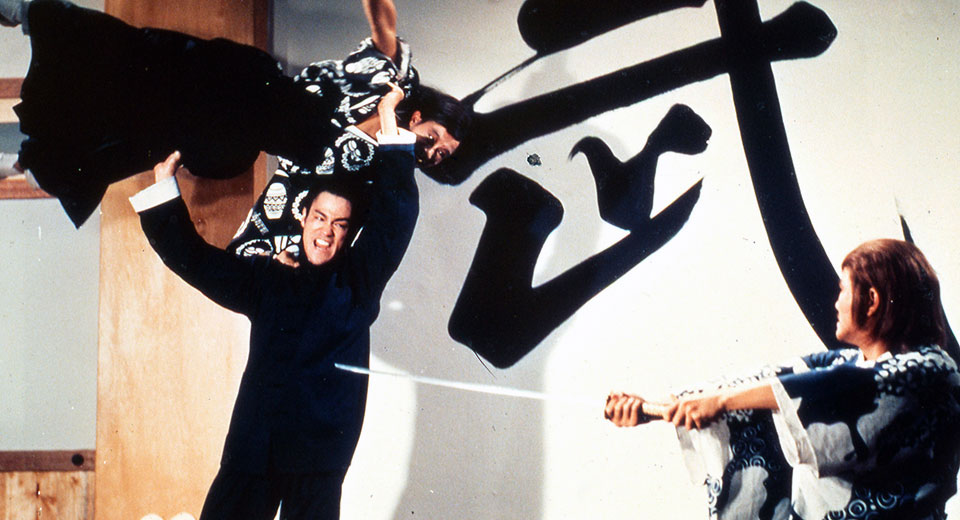 Bruce Lee’s crane pose and coolly casual backhand death blows are so oft-spoofed that they’ve become hyperreal; the whole world is so familiar with these gestures that any charades performance of Kung Fu is likely to rely on them. Whether we know them through Lee himself of one of his many acolytes—like Gordon Liu or Jet Li—they’re part of our collective muscle memory, and when watching a Bruce Lee movie for the first time it can feel uncannily familiar.

These iconic moves and more are deployed to lethal effect in Fist of Fury a.k.a. The Chinese Connection (1972)—not to be confused with Fists of Fury (1971)—directed by jack-of-all-trades Lo Wei , who also served as screenwriter and production designer (Bruce Lee became a notorious self-promotion machine with his sinewy fingers in every part of the production, distribution, and promotion processes, but didn’t direct all his most famous movies). Lee plays Chen, the most reckless disciple of Master Ho, founder of the Ching Wu School of Kung Fu in Shanghai. The prologue tells us that the legend of Ho’s mysterious death exists in countless variations, and that what we’re about to see is the most credible of these.

Shanghai in the 1930s was divided into a French zone, a so-called International Settlement governed jointly by Great Britain and the United States, and a nominally Chinese zone under significant Japanese influence. In Fist of Fury the Japanese Consulate wields most of the power, and they’ve got the Shanghai Police wrapped around their little finger. The Ching Wu School strives for unity among Shanghai’s Chinese (divided along Nationalist-Communist lines), its mission being “to serve the community and country.” Not unlike American self-defense-oriented community organizations liquidated by the FBI in the 1970s, like the Black Panthers and the Young Lords, the school is deemed a threat and infiltrated by the authorities. A Japanese mole poisons Master Ho to create a leadership crisis and undermine the organization. The school's Captain urges noble self-restraint in the face of the Japanese-controlled Hung Kiu School’s racist provocations, but Chen’s rage can’t be contained. He sets out to avenge Master Hu singlehandedly and, to nobody’s surprise, succeeds.

When 42nd Street’s grindhouses brought awareness of Kung Fu to New York in the 1970s, it became a popular form of self-defense in Harlem. Future members of Staten Island’s Wu Tang Clan caught one double-bill after another at the Globe and the Roxy Twin, which became their temples, and RZA later proclaimed Lee a “minor prophet." It’s not surprising that Fist of Fury resonated with the Black Power movement; Shanghai's public spaces are segregated by a racist government that adorns the gates of its parks with signs saying “No Dogs or Chinese Allowed” (duly kicked to pieces in slow-mo by the justice-pursuing Chen). Strength and discipline as taught at the Ching Wu School are needed for the David-and-Goliath struggle against a colonial power, in Shanghai as much as in any American city.