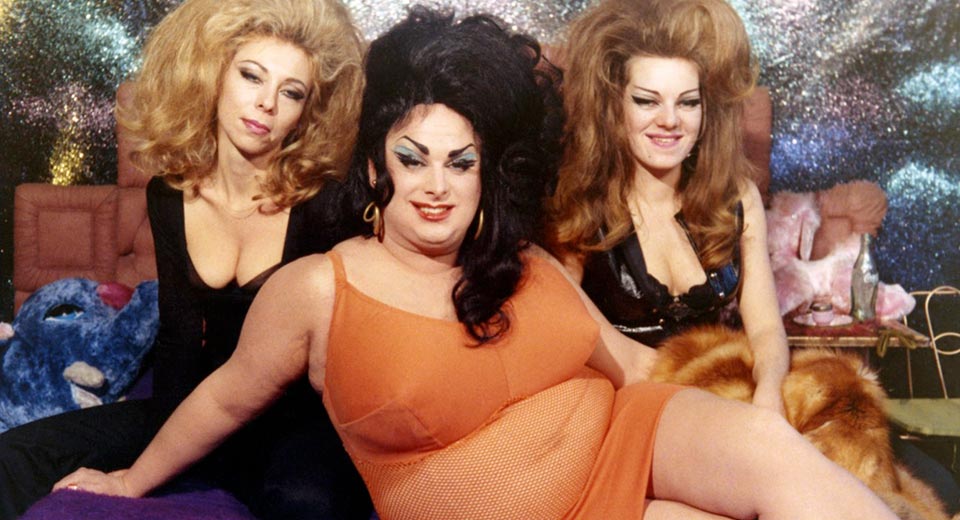 John Waters's Female Trouble is perhaps the director's greatest collaboration with the inimitable Divine, who plays Dawn Davenport, a petulant schoolgirl who grows progressively into an unwed mother, stripper, hooker, burglar, housewife, model and then finally achieves a sordid stardom as an outlaw.

Teenaged Dawn runs away and gets into the first Edsel station wagon that comes along. A few minutes later, in what is possibly the greatest sex scene filmed on a dirty mattress in the woods ever, Divine plays both Dawn and the burly man grunting away on top of her, a burping caricature named Earl Peterson. When the resulting offspring emerges 9 months later (another actor’s three-day-old baby was covered in fake blood and placed under Divine’s dress), Dawn rips the umbilical cord off with her teeth and spits a big chunk of it onto her paisley couch. It was apparently made out of condoms filled with liver.

Motherhood doesn’t suit Dawn (“Can’t you just sit here and look out into the air?”). She briefly marries a man named Gator (Michael Potter) who wins the prize this time around for thickest Baltimore accent. The great Edith Massey plays Gator’s aunt, and wears an incredibly tight, vinyl peekaboo leotard that makes her look like a large black pleather egg. Dawn’s looks catch the attention of Donald and Donna Dasher (David Lochary and Mary Vivian Pearce), owners of Baltimore’s most exclusive beauty salon. They brainwash her and get her hooked on shooting up liquid eyeliner (“Feel it in your blood, caressing your corpuscles?”), promising to make her a star by photographing her committing an escalating succession of crimes to prove their theory that “crime enhances one’s beauty.”

Female Trouble is dedicated to Charles “Tex” Watson, a prominent Manson Family member who’s been in prison since 1971 and whom Waters has visited. On Dawn’s big night, she delivers a crazed meta monologue that reverberates beyond the narrative and points to our collective fascination with criminals in general and murderers specifically: “I framed Leslie Bacon. I called the heroin hot line on Abbie Hoffman. I bought the gun that Bremmer used to shoot Wallace. I had an affair with Juan Corona. I blew Richard Speck. And I’m so fucking beautiful I can’t stand it myself.”