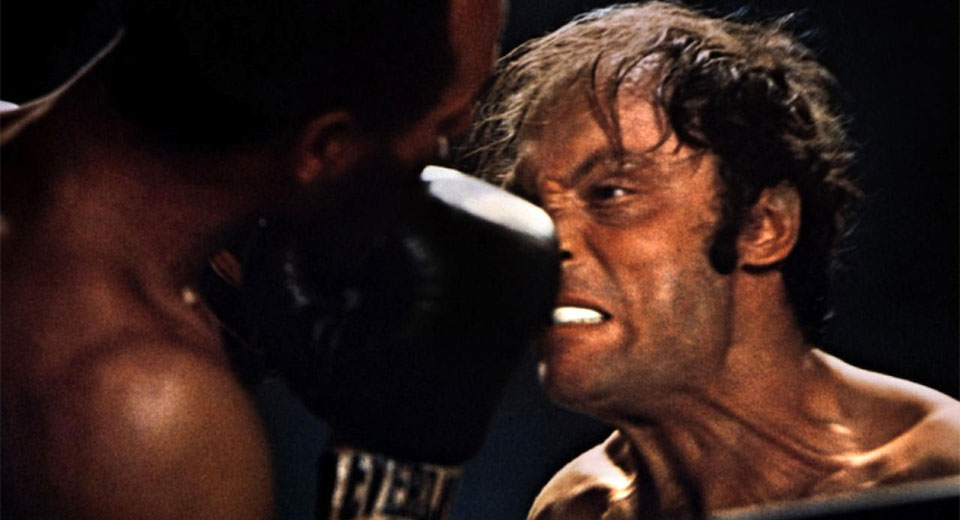 Stockton, California has long been rattled with poverty and hardship since the final days of the Gold Rush. In John Huston’s depiction of this bankrupt city, its residents do whatever it takes to get by. Opportunities are few and far between, found within factories, farmlands, and greasy sling joints littered throughout the area. Some succumb to destitution and quietly slip away, while others take comfort with the bottle. For Billy Tully and Ernie Munger, they try to make a quick buck by taking a shot at the amateur boxing leagues.

Poignant without an inch of sentimentality, Huston’s Fat City charts the economic malaise of a city through the lives of two boxers at the center of the story: one on his way up and the other on his way down. Billy Tully (Stacy Keach) is far past his prime at the age of 29. He spends his days picking up grueling labor jobs at a minimum wage, getting drunk at a local dive bar, and shacking up with local floozy Oma (Oscar-nominated Susan Tyrell). He will have one last chance at the ring, gaining a fruitless match against the renowned but physically ravaged Lucero (real-life champion Sixto Rodriguez). Ernie Munger (Jeff Bridges), on the other hand, initially appears to have a bright future ahead of him and earns the support of Tully’s former trainer Ruben (Nicolas Colasanto). That promise will not amount to much — he loses match after match, and is soon locked into an unwanted pregnancy with his girlfriend Faye (Candy Clark) and forced to provide support. Though Tully and Munger will only cross paths a handful of times, their stories are nearly one and the same.

Fat City is perhaps best remembered for its gritty authenticity thanks to the commitment of the talent involved. The blood, sweat and tears in the ring are as palpable as the alcohol-soaked verbal sparring between Oma and Billy. This can be attributed to Leonard Gardner's adaptation of his own novel, where the intricately woven prose of the source material is translated into fine detail on the screen by the cast and crew. In collaboration with cinematographer Conrad Hall, the on-location scenery is lensed in piercing sunlit streets that lead into dust-kicking gyms and grimy cafes. Huston fills the supporting roles and extras with non-actors, many of whom were either inhabitants of Stockton or boxing professionals — most notably welterweight champion Curtis Cokes, effortlessly playing Oma's estranged husband Earl. It's no surprise that Huston and Gardner (a Stockton native) were once amateur boxers themselves, allowing them to pour their first-hand experience into the creation of a very personal film for both of them.

Fat City leaves quite an impression due to its meditation on mortality and failure, concluding on a moment of reflection over that of resolution. One leaves the theatre not with the adrenaline rush of a thrilling heavyweight tournament, but with the intoxicated introspection Tully finds while sitting alone at a bar for hours. In today's despondent landscape, Fat City offers comfort in connecting us with the marginalized portions of society via their spirit and resilience despite the odds stacked up against them.