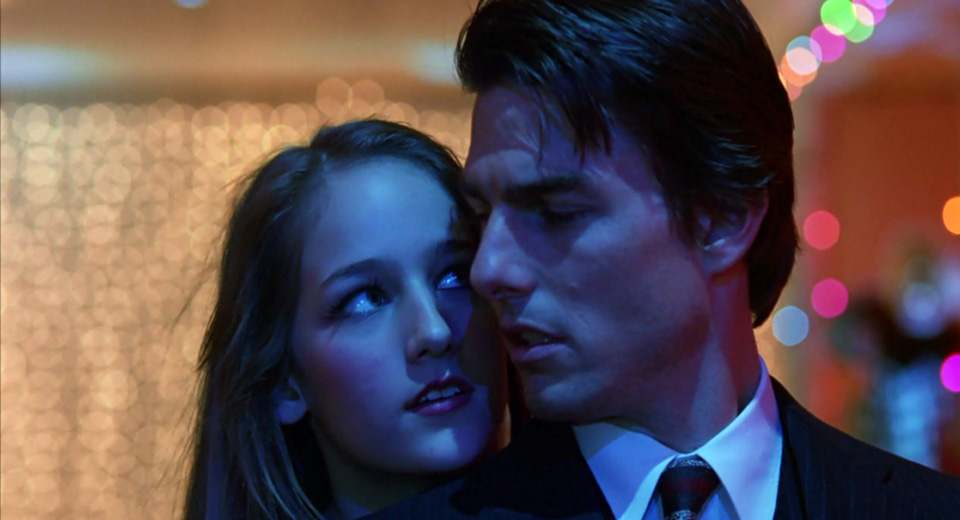 What was supposed to be Stanley Kubrick’s apotheotic swan song wound up being—according to the critics upon its release—an embarrassingly prudish and unhip attempt at artsy erotica, but Eyes Wide Shut (1999) has gotten better with age. It was, in Nietzsche’s word, untimely; its first audiences failed to understand it, while its real contemporaries had to bide their time.

Eyes Wide Shut might be the best example of a literary adaptation without remainder. It’s as though Kubrick had simply inserted Arthur Schnitzler’s hundred-page novella, Traumnovelle, into a cinematic Easy-Bake oven that magically transformed it into a 160-minute movie. (Maybe this is the golden literature-to-film conversion rate.) Critics derided Kubrick for thinking a story of sexual morality in 1900 Vienna could be plopped into 1999 New York, but the hangups and neuroses have changed little, and besides, both settings are decaying empires. The rich and idle still have to develop problems for themselves, and what institution better qualified to help them than the nuclear family?

After attending wealthy lawyer Victor Ziegler’s (Sydney Pollack) black-tie Christmas party and engaging in some harmless red-herring flirtation, Bill and Alice Harford (Mr. and Mrs. Tom Cruise) return to their massive Central Park West apartment (precisely modeled on Kubrick’s own Manhattan pied-à-terre) and exchange petty accusations and generalizations about the sexes (“I think we both know what men are like,” “Women… basically just don’t think like that”). The next night, Bill has a series of near-affairs—with a dead patient’s daughter, a prostitute, and a 16-year old Leelee Sobieski—and a med school dropout/struggling jazz pianist friend invites him to a clandestine sex party (on Long Island?) where robed priests partner nubile females with rich masked men. After a night of humiliations, unsolved mysteries, and unsolicited confessions, the Harfords’ marriage is, to say the least, strained.

The reception of Eyes Wide Shut was so negative partly because expectations of erotic thrills created by rumors from the torturous three-year production (400 continuous shooting days, according to The Guinness Book of World Records) were disappointed; the movie’s only soft-core scenes are the occult swinger bash and Bill’s blue-tinted Edison-actuality fantasy sequences in which Alice balls a handsome naval officer. But rather than lament what’s missing, why not enjoy what’s there, e.g. a beautifully crafted fake New York (at Pinewood Studios, England), complete with such locales in “the Village” as “Benton Street” and “Wren Street,” which look like some oneiric mash-up of Christopher Street and St. Mark’s Place.

Among Eyes Wide Shut’s strangest effects is that it feels like a video game: its dialogue is clumsily literal, repetitive, and expository; its plot is linear and structured like a quest; its protagonist encounters almost exclusively non-player characters, simple ciphers with no purpose beyond helping or obstructing him. Its simulacrum New York recalls the game-worlds traversed by Jude Law and Jennifer Jason Leigh in eXistenZ (from the same year), where the plot stalls if the players don’t use the correct phrases.

Psychological depth be damned—Eyes Wide Shut exposes the ruling class of a decadent civilization in all its shallowness. And for those inclined to complain about the relative lack of nudity: Tom Cruise’s face is naked almost the whole time, which is pretty indecent.