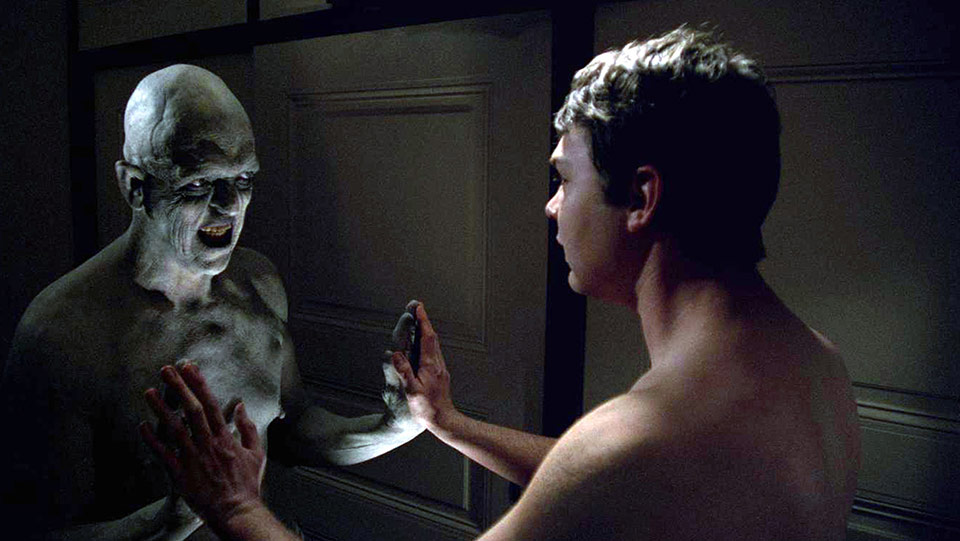 Oil scion turned writer/director Andrew Getty’s 2017 VOD release The Evil Within rejuvenates an old horror trope I’d otherwise see put to bed: you can’t get me if I don’t fall asleep! Recounting the film is recounting a dream: there’s this guy, Dennis, but he’s also this other guy, and they look the same except when one starts talking in this K2-high register and turns into Michael Berryman from The Hills Have Eyes. Dennis starts killing people to avoid the stories he hears in his sleep, though maybe the whole thing’s a carnival ride, or a horror show that never ends.

This isn’t simply to say The Evil Within fails on the plot level, although it does. Rather, the film is itself a dream, reproduced from Getty’s own childhood nightmares, with the director ditching the psychoanalyst’s couch for the makeshift production suite he obsessively created in his own Hollywood Hills mansion. It tracks that this is a film about therapy, and family, and the mind. The central relationships are all parent-child: between mentally disabled Dennis Peterson (the canonically baby-faced Frederick Koehler) and his fraternal caretaker, John (Sean Patrick Flanery); and also Dennis and his perverted mirror-image, a doppelganger from “the dark place” who convinces our otherwise gentle, ice cream-loving protagonist to kill. If dreams are “the royal road to the unconscious,” Getty’s is a highway gore zone, with plenty of it.

Having permanently handicapped his child-genius brother with a baseball bat and a push down the stairs, John parses his anger and guilt in daily sessions with the eventually taxidermized Dr. Preston, who himself studied Dennis extensively when he was still a novella-penning prodigy. While Dennis’s first killings are arbitrary — going after neighborhood kitties and kiddies — the project is ultimately a vengeful one. “When you damage someone’s brain, you darken their whole world,” he tells his older sibling from the stage of a climatic, macabre puppet show, with his fingers through the mouth of John’s girlfriend, where he’s reenacted his brother’s childhood crime. Such is why he’s killed their friends and neighbors and turned them all into props: “nothing remains familiar,” Dennis orates, finally able to use the language his injury stole, animatronically animated corpses lurching across the stage.

The metanarrative of Getty’s own obsessive artmaking — nearly bankrupting himself and ultimately dying of methamphetamine addiction before the film’s completion — mirrors Dennis’s own theatrical last stand: surrounded by the bodies of what might be everyone he’s ever known, the ringmaster’s dragged offstage and thrown in the asylum, still waiting for the curtain to lift, the dream to end.