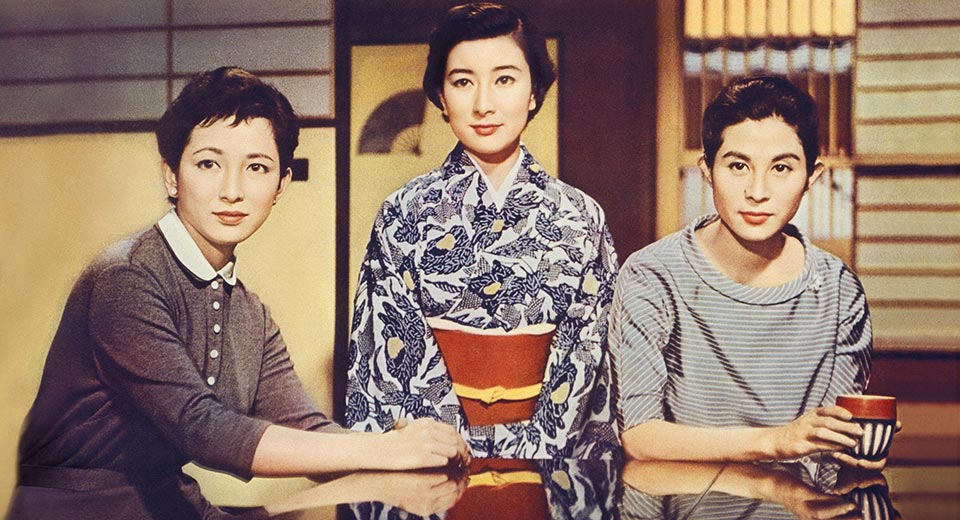 Heads up: our first book, Screen Slate: New York City Cinema, 2011-2015, is now on sale! Covering our first five years, it anthologizes a selection of our best daily write-ups on classics, obscurities, experiments, and discoveries, alongside a personal essay by Screen Slate's founder and several longform interviews with people like Agnès Varda, Can's Irmin Schmidt, and Kathryn Reed Altman. Buy it here!

You can also get a copy (and access to our comprehensive weekly overview email and special events) by supporting us with membership.

In Yasujiro Ozu’s first color film, 1958's Equinox Flower, which screens at Metrograph as part of Ozu in Color on May 31, there is a scene in which a middle-aged married couple sits together on a bench watching their two daughters (one marrying age and the other a teenager) floating tranquilly on a small boat in the distance. The trees sway gently, the water shimmers, the world seems to sigh contentedly in the warmth of summer. The husband sits stoically and the wife smiles, happy for the precious moment of family togetherness, maybe one of the last they’ll know as the thought of their daughter’s inevitable marriage grows larger in their minds. Even in this moment however, the husband checks his watch wondering if he can fit in a game of golf and the daughters float in the distance, separate from their parents, possibly sharing their own thoughts and feelings or simply sitting in silence. The wife tells her husband how she misses the wartime when the family huddled together during air raids, knowing that maybe they would die together. These were some of the happiest times of her life she tells him, a time of unparalleled familial closeness. She smiles as she speaks, great emotion just behind her words and eyes. Their daughters float into view in the far distance, they wave from the water and their parents wave back. The music swells and the film moves on.

Equinox Flower goes on to explore intergenerational conflict in Ozu’s typically assured, laconic and restrained fashion. The older daughter wishes to marry the man of her choosing and her father disapproves. The film expertly explores the tension between tradition and personal freedom, duty to one’s family and the desire to create a life of one’s own. In the scene mentioned above however, a perfectly constructed symbolic, emotional, and psychological exploration of the bonds of family, their limits and the individual’s perspectival place at the center of it all, Ozu has captured a moment in time with heartbreaking poetic resonance and power. Equinox Flower is another masterpiece from a celebrated master filmmaker, but the scene at the shore is a small gift in itself.