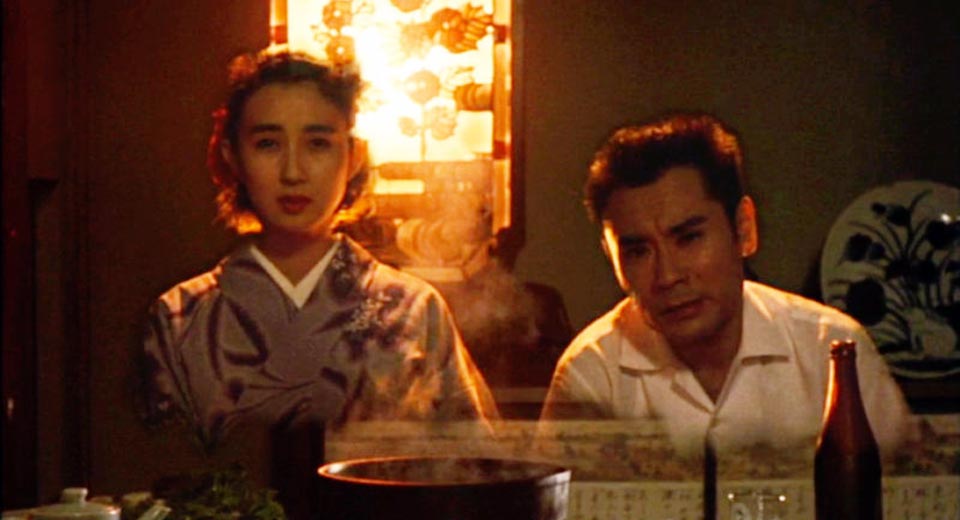 In an awkward title translation, Nobuhiko Obayashi ’s ‘Summer With Strangers’ becomes The Discarnates , an obscure term for ‘incorporeal’ that gives the film an undeserved tinge of horror. True, protagonist Hidemi Harada does run into his long-dead parents revisiting his hometown, but they’re more physically present and alive than their emotionally inert adult son, the warmth of their personalities thawing his cold existence.

A soap opera writer, Harada chooses to live in an isolated building surrounded by business during the day and no one at night, save desperately lonely 3rd floor neighbor Kei. Harada cruelly rebuffs her advances after getting what should be a shock straight out of one of his melodramas. Yet after his best friend asks to marry his recently divorced wife, Harada’s reaction is to go over and block their exchange like a scene rehearsal, laughing. Writing is Harada’s way of distancing, churning out emotions he refuses to personally feel. The melodramas playing on his TV are his apartment and life’s only source of color, yet he’s so deadened he never remembers his own work. Kei quotes it back to him: “They say you can’t bring back what’s passed. But that’s not true. You can, because it’s your past.”

Researching a story, Harada gets lost visiting a not-so abandoned subway station and decides to take a trip back to his hometown of Asakusa, formerly the main entertainment district of Tokyo. Once again Obayashi uses the camera to try and preserve a place in time, as much for narrative’s sake as for personal nostalgia. Harada is shocked to run into his father, looking the same as he did when Harada was a child. Dad invites Harada back to his own childhood home, and on seeing his mother cheerfully wave him in, Harada breaks down emotionally for the first time since he lost them both at age 12.

On his return Harada begins a relationship with neighbor Kei, possible only because of his happiness at his incredible second chance to know his parents. As his visits home continue, his relationship with both his parents and Kei deepen, yet his health takes a sharp downturn. Kei suggests Harada’s life is being sucked out by his regressive visits—contact with the dead brings him closer to the land of the dead, yet he’s never been more alive and aware. The straightforwardness of the magical realism makes it all the more emotionally devastating when Kei forces Harada to see how far he’s deteriorated—Harada’s parents realize they’re dead and might be hurting him, but all three want nothing more than to make up for years of emotional pain and loss.

The film’s Trojan horse, a sudden veer into straight horror, quickly reveals itself to echo the same pains of misunderstanding, rejection, and loss on a more visceral level. Confronted with his own death, Hidemi chooses emotional connection over life itself, and is thrown back into the world of the living because of it. —Danielle Burgos