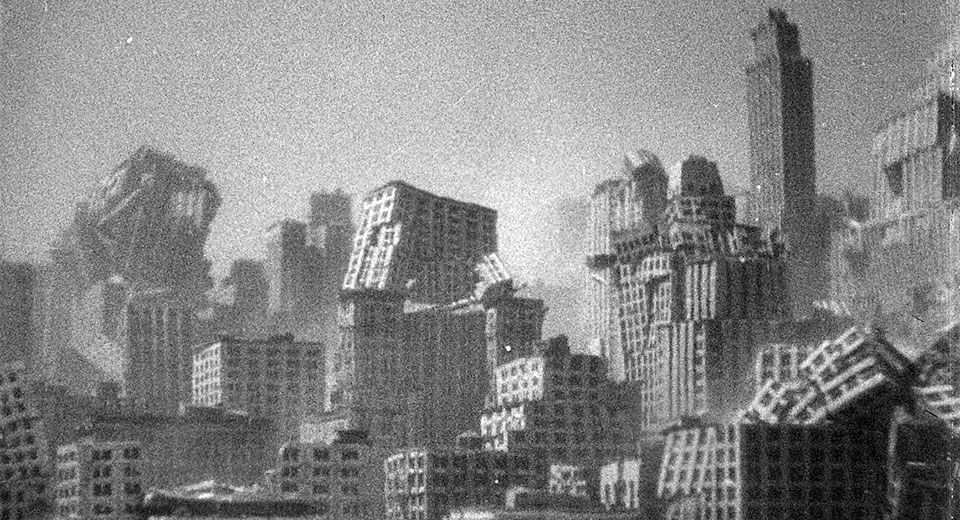 A forefather to the disaster films of the 1970s, Felix E. Feist’s 1933 film Deluge imagines what might happen if America was destroyed by a series of earthquakes and subsequent tsunamis. Whereas most modern disaster films take great pains to introduce you to the main characters and establish their lives before the cataclysmic incident, Deluge jumps right in—the first fifteen minutes of the film move quickly from bad weather, to disaster for the west coast, to the end of the world (a newspaper headline declares “Earth Doomed”). Once the disaster makes it to the east coast, the montage is comprised of stunningly effective model work and rear-projection shots that show New York City crumbling into the sea. Skyscrapers break apart and debris crushes throngs of panicking civilians as the city’s skyline literally dissolves into nothingness.

So once the disaster itself is over, what remains? That’s the question Deluge is most interested in. The survivors find themselves in a land as foreign as Oz, with nothing left except nature and a few shacks. Swimmer Claire (Peggy Shannon, whose life was tragic in its own right) washes up on shore and immediately becomes an object of lust for the men who find her. Claire has her own disaster—she’s leered at, pawed at and threatened with violence until she escapes her captors and finds another group of survivors to take her in. Martin (Sidney Blackmer), whose wife was killed in the storm, takes her under his wing—although not totally altruistically—and they begin a new life together. Of course, there are more melodramatic twists to come.

As a pre-code film, Deluge deals with polygamy, rape and violence (including some endearingly realistic stilted fist fights between the rival survivors) as facts of life in the post-apocalyptic society. If you’re feeling anxious about the state of the world, Deluge isn’t necessarily going to take your mind off things. It is about the apocalypse, after all. But as an underseen curio once thought to be lost, and an antecedent (by 40 years!) to the disaster film craze, it’s a fascinating watch.