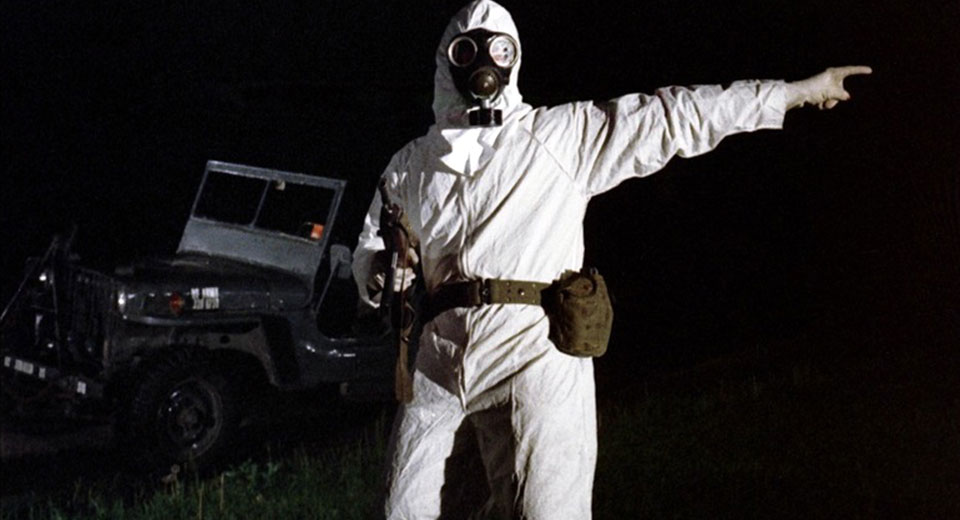 The world of the living recently lost George A. Romero, the father of the living dead as we know them today. The director, who passed away the age of 77, will undoubtedly be best remembered for the Dead films, a series which weaves an unflinchingly bleak, apocalyptic vision of a world descending into chaos, strife, and barbarism after the dead begin to return to life seeking human victims. These politically charged films serve as both nightmarish works of horror and shockingly blunt social critiques. Five years before Romero unleashed the second of the Dead films on the world—a movie that savagely lampooned American consumerism as a soul stealing machine which left its victims empty vessels fit only to walk mindlessly in search of more (Roger Ebert memorably dubbed it “a satanic vision of America”), Dawn of the Dead, he made a film that bears a striking resemblance to it.

The Crazies, which was released in 1973, feels in many ways like a bridge between Night and Dawn, but the film holds a privileged position outside of the Dead series. It’s hard to overestimate the impact of Night of the Living Dead and Dawn of the Dead on contemporary culture, not only the mind-boggling popularity and ubiquity of The Walking Dead, but the films’ influence on video games, literature, film and music as well. Because of this it can be a somewhat difficult task to look at the first two Dead films and see their brilliance as independent works of art. Undoubtedly, their nearly Platonic perfection as works of psychologically resonant allegory wedge them so deeply into the popular consciousness, it is hard to imagine a time before they existed. The Crazies, however, allows us to see Romero’s style and craftsmanship unobscured by the long shadow the Dead films cast (like many great works of art do) upon themselves.

In The Crazies, the central place of montage in Romero’s work is on display. The film tells the story of a government engineered bio-weapon that is accidentally released on a small town, turning its victims into violent lunatics. The film moves quickly from one location to another—from military situation rooms, to farmhouses, to a high school crowded with panic-stricken townspeople—barely slowing down long enough for the viewer to catch his or her breath. With documentary-like immediacy, and sly humor, Romero’s camera (helmed by Night of the Living Dead’s most famous zombie, Bill Hinzman) grabs glimpses of events, creating a chaotic collage, which, in its fragmentation, points to a holistic world with a reality outside of the frame. In essence, Romero’s terse realism is what creates his fantasy—he shatters a world that never existed and puts it back together as evidence that it does.

This of course is what lends Night, Dawn, and The Crazies their, at moments, detached, fly-on-the-wall quality. These films are not cold however, rather they are filled with naturalistic performances and memorable characters that warm them and create a human point of connection. Romero’s skill with actors and the characters they bring to life make the viewer actually believe that it matters, and more importantly, care whether the world goes to hell or not.

Where to stream The Crazies