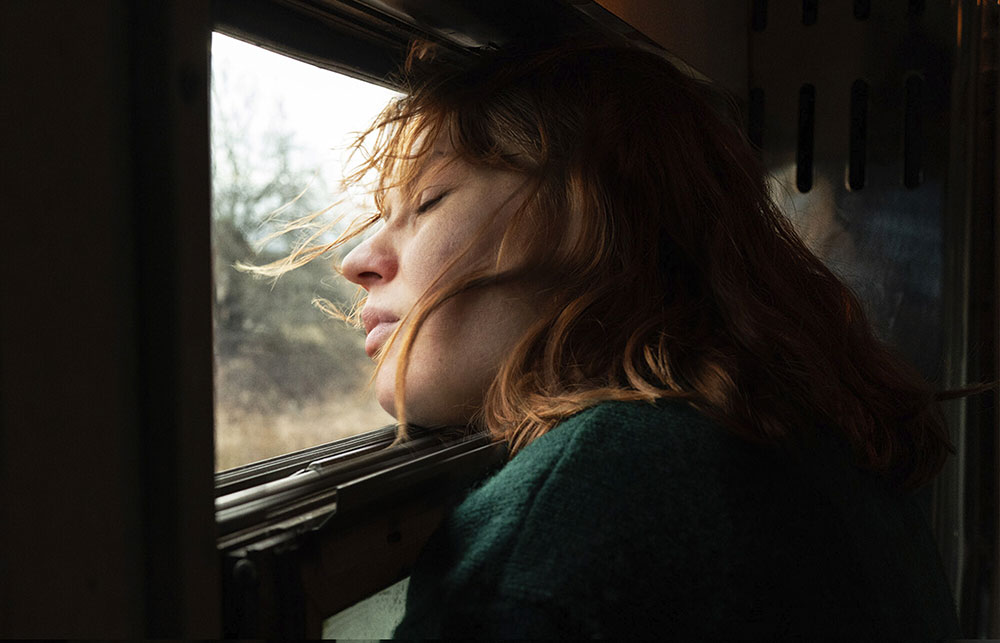 Two strangers meet on a train. The conceit of Compartment No. 6 (2021) is simple, but the flair with which Juho Kuosmanen orchestrates his film’s emotional universe is anything but. What there is to know about the lonely, aching interiors of Laura (Seidi Haarla) and Ljoha (Yuryi Borosov) is almost whispered by the director through measured hints: the unlively green of Laura’s sweater, the dimly orange hues that trickle from the corners of their compartment, the frigid paleness of the Russian winter that stretches outside the train’s window. The two are strangers not only to each other but also, as we sense discreetly, to themselves. What emerges between them over the course of the film is not quite love, nor lust, nor friendship exactly, but warmth—if warmth means the feeling, even if just for a train ride, of being known by another.

Laura’s jadedness immediately clashes with Ljoha’s boyish exuberance. He strikes Laura as uncouth. After all, he chews too loudly, talks too much, and seems to only be interested in the phrase “Fuck you.” Over time, claustrophobia yields to an easy emotional rhythm—or maybe, Laura decides she lacks better options. The two begin to unravel each other’s wants, dreams, and loves. Laura and Ljoha also begin to recognize that they come from irreconcilable worlds: she, a foreign student, and he, a working-class laborer. During this train ride, however, irreconcilability can be an afterthought. Their journey offers a reprieve from the societal divisions imposed by the outside world, inflected by the geopolitics of post-Soviet Russia—a layer of their story more explicitly developed in the novel by Rosa Liksom on which the novel is based. If a journey is escape as much as discovery, Laura and Ljoha’s escape is from context altogether, political and emotional. Our characters are people who have been made fragile by what it means to exist: to live within the stratifications and ugliness imposed by rules they had no hand in writing.

Kuosmanen has a gift for the understated. His images, even at their most minimal, teem with so much: hushed feelings that reject precision, emotions that crackle with illogical circuitry. The facile move would be to define Compartment No. 6 by its melancholy alone, but the film requires patience. Even if belated, Kuosmanen reveals any blueness in Compartment No. 6 to be mere gauze for the effulgent optimism at its heart. Near the end, we see Laura standing out by the shore, peering out at waters both ambiguously gray and ambiguously large. The waters seem to go forever, unlike Laura, who cannot. Neither she nor Ljoha have articulated their answers, but they feel them, and that might be all they can ask for. “That’s it?” Ljoha asks; Laura replies with an earned smile.

Compartment No. 6 screens this evening, December 19, at the Museum of Modern Art, as part of the series “The Contenders 2021.”