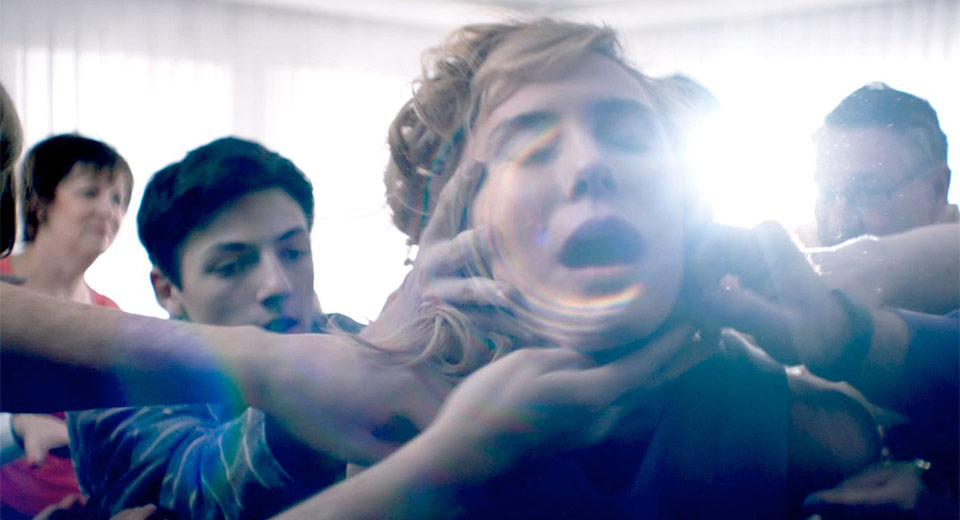 A virtual Jungian salon, a visual interpretation of your peer’s dreams — this is what collective:unconscious , playing tonight as part of BAMcinemaFest 2016, achieves as it envelops you in five different dream worlds, each with distinct style and bracing originality.

The film begins with a literal attempt at hypnosis — Daniel Ryan’s monologue reminding the audience that all hypnosis is self-hypnosis, and that something as commonplace as watching a movie in a movie theater is allowing yourself to be hypnotized. The entrancing animated credits sequence, done by Maya Edelman, introduces us to the concept: five young, idiosyncratic filmmakers — Daniel Patrick Carbone, Josephine Decker, Lauren Wolkstein, Frances Bodomo, and Lily Baldwin — came together to adapt one another’s dreams. Ryan hypnotizes each director in turn, bringing them into the dreamworld along with us.

The five short films vary wildly in tone, to disorienting, yet cohesive, effect. Carbone’s film, about a man and his grandmother trying to survive the deadly effects of a mysterious sound, is shot in lush, Bela Tarr-esque black and white, and presents a world where heredity and music is witchcraft that might literally save our lives. The formerly incarcerated tell the stories of their first day out of prison in the next film, and Decker turns them into a funhouse mirror where their confusing, frustrating, and downright scary stories are retold through eerie modern dance. Wolkstein’s film is about Mt. St. Helen’s High School (literally, inside the volcano), and the gym coach who screams “Enjoy the struggle! Your body is your shield!” at his students during his self-reliance and preparedness drills. It’s reminiscent of something you might see in a good Yorgos Lanthimos film — horrifying, and still kind of funny.

The Grim Reaper — or Ripa the Reaper, as she’s called in the film — hosts the weekly public access show “Everybody Dies!” where she welcomes the newly dead into the afterworld in Frances Bodomo’s film. The film speaks to the epidemic of violence against Black youth, as Ripa lists the reasons you might die (“You might be chased by the police, or you might be chased by someone who thinks he’s the police”), leads young Black children into the underworld, and demonstrates how to whack, and get rid of, a soul. Finally, Lily Baldwin’s film explores the world of a suburban mom with a newborn baby who feels (another) beast growing within her. Baldwin herself gives a stunning, incredibly physical performance as commonplace experiences — preparing dinner, kissing your partner, drinking milk — become erotically-charged, dance-inspired ordeals.

collective:unconscious is a movie that takes dreams and hypnosis seriously, exploring the world of other people’s subconscious with due respect to the undercurrent of weirdness present in all dreams. As one of the filmmakers, it must have been quite an eerie, amazing experience to see your dreams on the big screen: yours, but not just yours anymore.