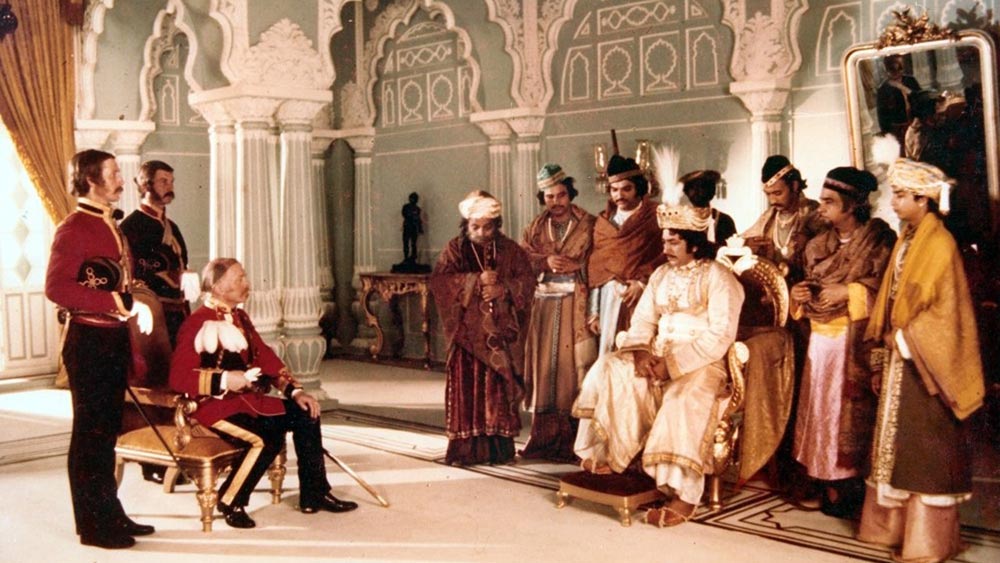 During his tenure as Governor-General of Colonial India (1848–1856), Lord Dalhousie infamously annexed several princely states under the “Doctrine of Lapse” policy, which gave the British East India Company suzerainty to take over the administration of a state if its ruler was either manifestly incompetent or died without a male heir. The last cherry to pop into Dalhousie's mouth was the Kingdom of Awadh, under the pretext of its monarch Wajid Ali Shah's misgovernance. This was executed through the agency of General James Outram, who was the British political agent in Lucknow, Awadh.

This historic event forms the backdrop of Satyajit Ray's The Chess Players (1977), which is based on a short story by celebrated Hindi and Urdu writer Premchand. Chess is used as a metaphor for the political maneuverings of the Britishers and is an actual ingredient of a parallel plot involving two noblemen, Mirza (Sanjeev Kumar) and Mir (Saeed Jaffrey), addicts of the game. The two friends, fearing trouble, retire into a village and play right through the Annexation and the arrival of the British army in Lucknow. Their story lends humor to the film, although there comes a note of pathos at the end.

Even the eight-minute prologue—which attempts to telescope one hundred years of Awadh-British relations, wherein treaty after treaty progressively stripped the Nawab royal line of their territory and autonomy—is narrated in a sarcastic and lighter vein, setting the tone of the film. Extensively researched, The Chess Players was Ray's first film in Hindi and his most expensive. The ornate art direction by Bansi Chandragupta, also behind the upper-class sets of Charulata (1964), constructs an authentic portrait of Nawabi life in Wajid's Lucknow. Likewise, Birju Maharaj's choreographed Indian classical song-and-dance sequences reflect the indulgences of the aristocrats.

Ray's depiction of Wajid (Amjad Khan) as a complex, three-dimensional character makes the Nawab worthy of film treatment. He is a devout Muslim who doesn’t drink and has little inclination to rule, but consorts with concubines and immerses himself in music, poetry, and dance. The contradiction in General Outram's (Richard Attenborough) character makes him a captivating figure, too, as he expresses discomfort in forcing an illegal treaty on Wajid. The Chess Players offers an unsparing view of the clash of two cultures—feudal decadence and malignant colonialism.

The Chess Players screens this evening and tomorrow, November 11 and 12, at Metrograph on 35mm as part of the series “Satyajit Ray x6.”