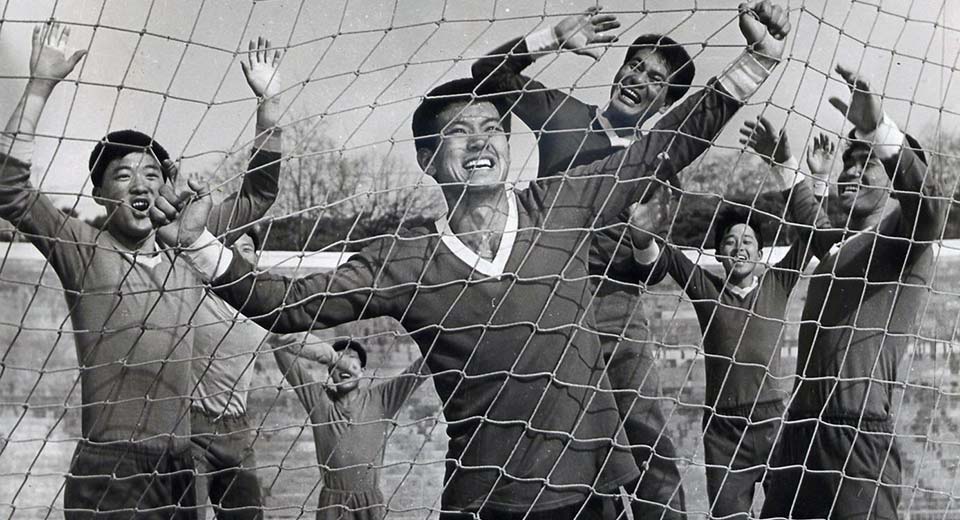 Spectacle Theater deserves applause for consistently programming North Korean films, among them the cult monster movie Pulgasari (1985), a mainstay since Spectacle first opened its doors in 2010. Their current series also includes Urban Girl Comes to Get Married (1993) and Centre Forward (1978), both of which boldly defy genre labels thanks to the insular development of DPRK’s film industry. Juche cinema (theorized by Kim Il-sung in his 1976 treatise, On the Art of Cinema) is socialist realist in tone and intent, mixing cheerful musical interludes into narratives of self-overcoming in the face of overwhelming odds. The Republic’s “first soccer movie” (have there been others?) faithfully follows this pattern, but adorns it with enough freeze frame-punctuated sports action to make it palatable (as well as lyrics along the bottom of the screen to make it interactive).

The year 1978 was an auspicious time to make DPRK’s first soccer movie. The DPRK national soccer team was doing better than ever before (or since), having made it to the Olympic quarter finals in 1976, and in 1973 Kim Il-sung had published his affirmation of the importance of cinema, in which the director comes off as an especially important figure: "[In] socialist society the director is an independent and creative artist who is responsible to the Party and the people for the cinema. ... Just as victory in battle depends on the leadership ability of the commander, so the fate of the film depends on the director's art of guidance."

It’s easy to make fun of the cultish earnestness of North Korean culture. It’s much harder to imagine the real aspirations, pleasures, and frustrations of this long-ridiculed people. Can a movie like Centre Forward give us any clue about the lives of its subjects—or of its audiences? For all its discourse about national goals and pushing yourself to the limit to meet them, we’re left wondering how seriously the actors and filmmakers themselves took it. Like soccer, cinema is team sport, and both are prominent aspects of a nation’s public image. If the coach has to “crack the whip” to help the team exceed its current standards and transform the People’s Republic into a “great sporting nation,” do directors feel the same pressure? Over and over again, the importance—for both athletes and artists—of “hard work and loyalty to the party” is emphasized, but are this country’s people really as starry-eyed as their screen representations would have us believe?

Viewing note: as of August 2020, Centre Forward has been posted with subtitles on YouTube and Vimeo