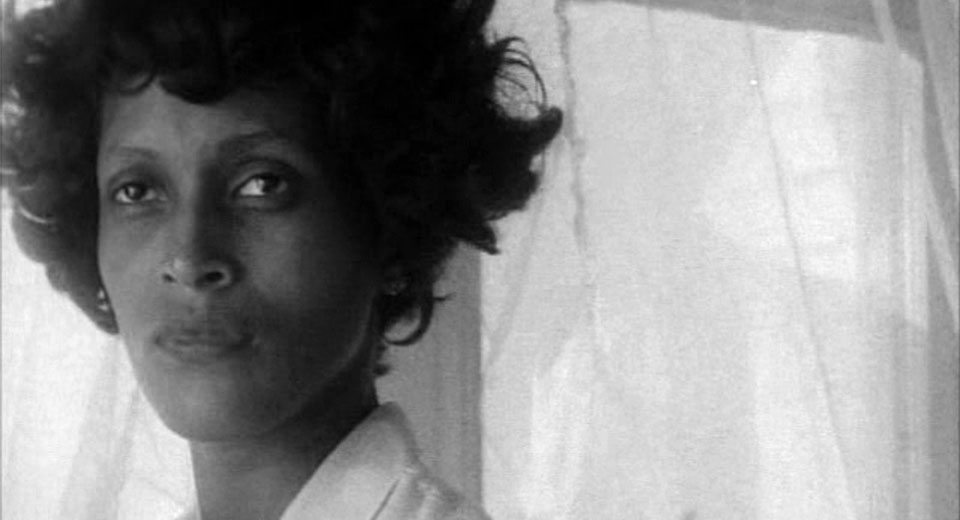 In Haile Gerima’s Bush Mama (1975), experimental camera and editing techniques—de rigueur for a film school thesis film—are used to graft us onto Dorothy’s experience of life in Watts, Los Angeles. The black-and-white image frequently cross-dissolves into inverted colors, symbolically flipping both the city’s race relations and the concepts of justice that govern life in it. When Dorothy (Barbara O. Jones) gets robbed in the street it’s shot in POV close-ups, forcing us to share her and the teenage purse-snatcher’s mutual glares. When her boyfriend, T.C. (Johnny Weathers), sends her a letter from prison, he speaks it straight into the camera through the bars of his cell as the camera tracks along the block and reveals half a dozen other black men leaning bored and dejected on their cell doors. The sound is often a collage of sirens, helicopters, police radios, and social workers’ nagging voices driveling about spouses’ savings accounts ad infinitum—a reminder that systemic oppression is not limited to the spectacular instances of police violence that we’ve come to expect, but also wears us down through the ceaseless, intrusive management of lives and bodies.

The chronology of the film is non-linear, and we often witness consequences before their causes, representing the sensation of life as a series of unexpected, often unjust, experiences. T.C. leaves the house for a job interview and is suddenly in jail; we don’t discover until much later that he was picked up on the basis of a vague description, which reflects the bewilderment that T.C. and others in the same position must face when locked up without explanation. When we see Dorothy being beaten in an asylum cell towards the end, we have as little idea of how she wound up there as she does, failing to see a causal relation between her justified, instinctive act and the process of detention/indictment/incarcera tion that the justice system’s machinery says must inevitably follow. The law fabricates causality where there isn’t any, and we are compelled to abide by the narrative it constructs; if it says that solitary confinement is necessitated by the violent nature of an inmate—rather than being a cause of instability and aggression—it becomes the effective truth.

The title’s “bush mama” refers to an Angolan woman depicted holding a baby and a rifle on a poster that teenaged Angie (Renna Kraft) brings home from a Liberation Day march. Hung on Dorothy’s living room wall, the picture becomes a point of fascination for her. If the men and women of Angola have organized themselves into an armed resistance to the colonial occupation of their country, why shouldn’t the blacks of Los Angeles find what her friend Simmi (Simmi Ella Nelson) calls the “calculation and togetherness” necessary for taking “a big piece of Uncle Sam’s pie,” instead of begging for mere crusts? Their older, alcoholic friend Molly (Cora Lee Day) dismisses any talk about black liberation as “militant trash,” her own mantra being that “niggers are always bullshitting, backbiting, and killing each other.” On the other hand, young Angie is studying the liberation movements in South Africa, Rhodesia, and Mozambique and learning karate, and T.C. is developing a critique of black consumerism (“We come out with ‘Right on!’ and they come out with Right-On Deodorant”). It’s not obvious whether Gerima is making a statement about the exhaustion of the Black Power generation of the 1960s and the emerging, youthful enthusiasm inspired by the latest wave of African decolonization struggles of the 70s, but the case could be made.

Bush Mama is a brutal depiction of the meat grinder that LA’s welfare-bound blacks are shoved through daily, from social workers requiring they get abortions to cops raping their daughters in their empty homes. But it has moments of unexpected levity, like a paranoiac ranting to strangers on a street corner about being the Prince of Dahomey and eating only “prince food,” such as “a Watusi-style pickle” and a “circumcised carrot.” The soundtrack is fantastic, with Onaje Kareem Kenyatta’s flute- and bongo-dominated narrative funk songs about brothers being thrown in jail while real criminals like Nixon go free, sisters walking the streets breathing smog, and welfare workers perennially harassing both.