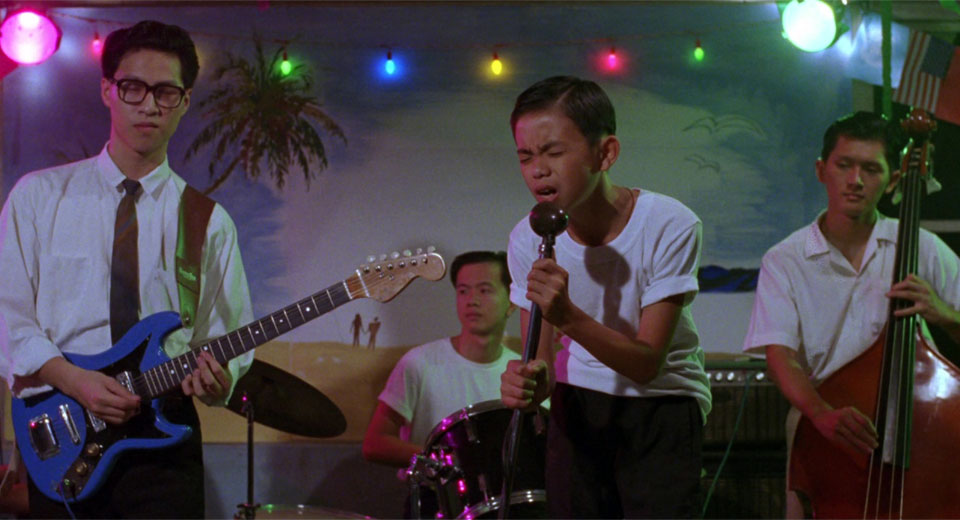 Edward Yang's A Brighter Summer Day  (1991) is panoramic in more ways than one. Yang seems to have adopted the camellia, a flower beloved by the Chinese for its "elegance and refined beauty," as his aesthetic standard. His compositions are wide, balanced, and filled with detail. The film is narratively no less expansive; among its themes are generational conflict, national identity, and the dialectic between stability and change.

Based on the first juvenile capital crime in modern Taiwanese history, A Brighter Summer Day follows two preteen-to-high-school-dropout street gangs, The Little Park Boys and the 217 Gang, in the fall of 1960. Xiao Si'r and Lao Er are brothers. Their father has been made timid by the civil war that led to a mass migration from the mainland to Taiwan in 1949. He has a government job and values "security and stability," while the boys are belligerent, disdain authority, and rely on personal charisma. Whenever the father's position is challenged, his wife gives him advice like "This isn't the time for principles" and "Try to just play along." By contrast, their children's generation adopt jazzy nicknames like Sly, Tiger, Threads, and Airplane, wear high-waisted jeans and leather jackets, and listen to Elvis and The Platters. But their rebellion isn't merely aesthetic; when relations sour, the gangs go at each other with bricks, baseball bats, and katanas. Although the four-hour film is much more patiently paced, it's firmly in the tradition of such juvenile delinquency classics as Rebel Without a Cause (1955) and Crazed Fruit (1956).

Another central duo is rock n' roll singers Deuce and Cat. Prebubescent Cat has an uncanny ability to transcribe English vocals and sing them in an ethereal falsetto. (He sends a tape of his rendition of "Are You Lonesome Tonight" to the King himself, who mails him a ring as a thank you.) Other great characters include Shangdong, a shaved-headed mob boss who eats massive portions of ramen off the pool table by candlelight, and Honey, the rival gang's legendary leader who returns from hiding in a sailor costume and compares himself to War and Peace's Pierre Bezukhov.

Apart from the USA-ROC-UN beflagged youth center and the movie studio adjacent to the school, the action mostly takes place in domestic settings. Yang has a knack for portraying them as both intimate and isolating, often framing single characters in the center of vast rooms or huddled in cramped cubbyholes. One of the coziest nooks I've ever seen in a movie is Si'r's closet bunk, which he crawls into to journal by flashlight.

Yang's auteurial credo might be best expressed by Si'r's jealous outburst at a film director who's been screen-testing his girlfriend: "You can't even tell real from fake. How can you make movies?" It would even work pretty well as a tagline for Lincoln Center's "non-actor" series, of which Yang's film is a part.