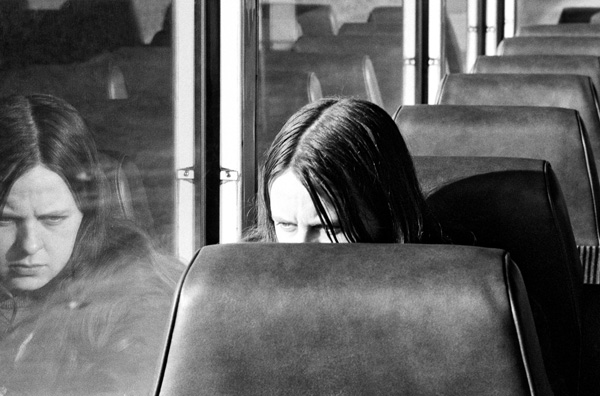 Bernadette (2008) is a lyrical and elliptical homage to Bernadette Devlin, an Irish Socialist Republican civil rights activist throughout the period known in Northern Ireland as “The Troubles.” In 1969, at age 21, she became the youngest person ever elected to the British Parliament. Though she was the only MP present at the Bloody Sunday massacre in which the British military murdered 13 Irish civilians, she was denied the opportunity to speak on the subject in a special session of Parliament devoted to the incident. She is well known for slapping Home Secretary Reginald Maudling in the face that day, after he said the British army acted in self-defense. She and her husband survived being shot seven to fourteen times (accounts vary) in front of their young children by British Loyalists in 1981 while British soldiers waited outside.

Duncan Campbell’s Bernadette consists of archival material interwoven with glimpses of filmic ephemera, textures, evocative and sometimes antithetical fragments of sound and moments of darkness. We see Devlin, standing amid crowds of fellow protesters in numerous Council Housing-lined streets, being interviewed for radio and television. Her speech is clear, calm and rousing, not least because her demeanor is heavy-hearted. We glimpse raw footage of an interviewer sitting in a television studio far from the action, taping only his side of the interview: “I’ll do that again now.” “Now I’ll listen.”

Campbell represents Bernadette and tells her story, but proceeds with the formal imperative to refer constantly to the impossibility of this act. Modes of representation are characters, too, and the inherent limitations of the representation being created are made clear. Campbell is using archival materials which are, in his words, “already mediated images and writings about her … My film is an admission of limitation, but I have too much respect for Devlin for it to be an expression of nihilism or irony. I am striving for what Samuel Beckett terms, ‘a form that accommodates the mess.'”

The result is a film which gracefully navigates the real and imagined interstices of Devlin’s personhood and the mythologies surrounding her. In the film’s first moments, the camera navigates a cement wall, with sharp, fleeting animated lines and dots intruding. A close-up of Devlin’s face appears and reappears, but only in moments where she is not saying anything. She is about to say something, we imagine, to respond to an unseen speaker, as her impatience is apparent but also coolly contained. We can’t wait to hear what she has to say.

Arbeit (2011) is another of Campbell’s narrative experiments, plumbing the depths of the German monetary system via a letter, read aloud, principally to Hans Tietmeyer (former head of Deutsche Bundesbank, including during the transition to the Euro and the economic crisis). We see a series of still images, sometimes punctuated with direct animation in the form of trembling, punched out holes, and interspersed with static shots of glaring klieg lights. The monologue is all the more captivating for its one-sided, meandering, creative conjecture. It asks: “How did the principals of the social market economy first engage … the ambitious feelings of the youth that was you?” and then suggests some possibilities, including Friedrich Hayak’s “The Road to Serfdom” (cue a close-up of the book being opened to the first page so that we can read “Dedicated to the Socialists of all Parties”), “Human Action” by Ludwig von Mises, “The Open Society and its Enemies” by Karl Popper (especially, of course, volume 2 which focuses on Hegel and Marx) and “Der Christ Und Die Soziale Marktwirtschaft” by Patrick Boarman.

The disembodied voice, in language that borders on baroque, describes the postwar division of Germany as leading to a condition where the East became “a living argument as opposed to a living state”, whereas the West enjoyed a return to the normalcy of department store goods displayed in “equipoise splendor” and bakeries, “out of whose doors gushed the warm creamy smells of paradise.” “The land and the people were the same, only the system was different,” and the Deutsche Mark of the West came to be equated with freedom itself. Later, the transition to the Euro is mired in a its own set of mythologies and shifting signification, leading in part to the recent and continuing crises, all with Hans Tietmeyer at the helm.

Throughout the film, our narrator addresses its subject only as “Hans”. The elucidation of Tietmeyer’s full name comes courtesy of an image of a typewritten RAF (Red Army Faction) statement from September 20th, 1988, reporting on their planned attack on Hans Tietmeyer: “Today…we attack the Secretary of State for the Minister of Finance, Hans Tietmeyer. Tietmeyer is a strategist and a key figure in international crisis management, which, on the national, European, and international levels, strives to render the economic crisis of the imperialist system governable and to prevent the collapse of the economic and financial system. He is deeply involved in the formulation, coordination, and establishment of imperialist economic policy – in recent years he had a part in every important monetary and economic decision that was taken.” The next day RAF was forced to report: “We did not succeed in shooting Tietmeyer. We intended to eliminate the driver first so as to bring the car to a stop, but the automatic pistol jammed.”