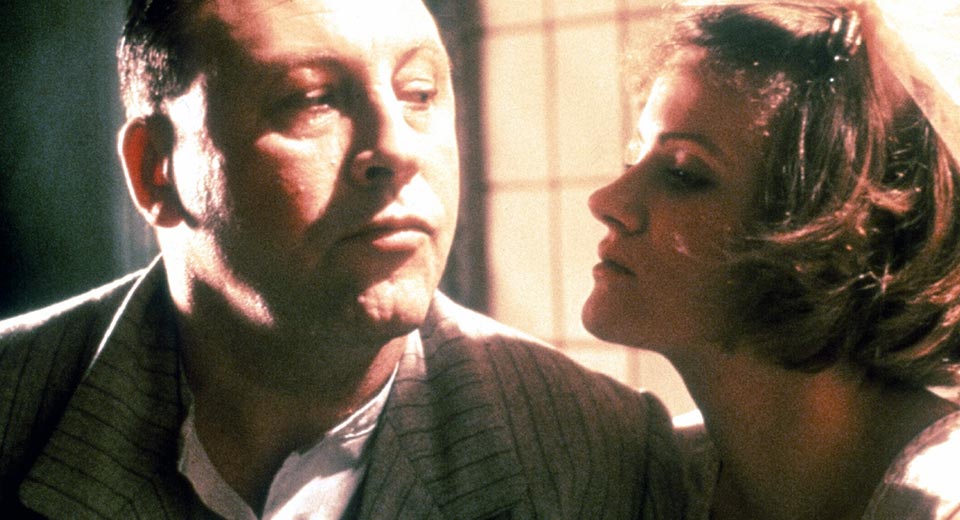 When Rainer Werner Fassbinder made Berlin Alexanderplatz in 1979/1980 for thirteen million DM, critics decried it as a gross misallocation of public funds. (The film was financed in part by the German public TV station, WDR.) But as Fassbinder pointed out in a 1980 interview, for its length of 15.5 hours that's cheap—and legend has it that he never shot more than two takes, of which he'd only print one to avoid the delay of watching rushes.

Runtime is, unavoidably, the most discussed aspect of Alexanderplatz. Vincent Canby remarked in his review, "One could be reasonably expected to read the book in the same period of time." I'm a slow reader, but it's hard to imagine anyone getting through Alfred Döblin's 400–600 page book (depending on the edition) that quickly. With regard to literary adaptations, instead of the truism "The book is better," I like telling people, "Watch the movie instead, it's shorter." [Ed. note: Mr. Bjorkenheim is co-owner of a bookstore.] I think this holds true even of Alexanderplatz—the novel is a slog. If you've found yourself struggling to get through it, don’t be ashamed; when Fassbinder first read it, he was so bored by the first 200 pages that he almost didn't finish it, and Günter Lamprecht had started and abandoned the book a few years before he was cast for the lead role.

The story, which Fassbinder himself called "incredibly banal" and "ludicrous," revolves around Franz Biberkopf, a former cement- and transport-worker and recent manslaughter convict who leaves prison and tries to become "decent," only to be battered down time and again by Fate and capitalism.

Insofar as it makes any sense to talk about the "differences" between an adaptation and its source, Berlin Alexanderplatz doesn’t have many. Fassbinder avoided introducing a "modern consciousness" of subsequent German history that would have framed Franz Biberkopf's involvement with the NSDAP as an ominous prelude to the Third Reich. Having written the novel in 1928, Döblin himself didn't know what the budding Nazi movement would eventually amount to. In Fassbinder's words, "Döblin didn't like the Nazis much … Though he also didn't take them very seriously"—Trump-dismissers be warned.

Fassbinder thought his countrymen were woefully ignorant of German history, and his goal with Alexanderplatz was pedagogical. Although the parallels between the Weimar and Federal Republics are not explicitly presented, they make themselves felt through certain attitudes of the period that had started to reemerge fifty years later. "I see citizens who'd rather have peace, order, and discipline again," he told an interviewer in 1980, "and this in a society that in many respects is falling apart."

Fassbinder didn't make the central square of Alexanderplatz itself into a major presence in the film. "What Alexanderplatz really was can be shown just as well in other ways," he said, "through the places which the people who are otherwise on Alexanderplatz or on the streets of Berlin flee to." Hence the emphasis on interiors, especially domestic ones. Otherwise, Fassbinder would have had to either reconstruct the Alexanderplatz of the 20s, or, another option he entertained, use Place de Pigalle in Paris or Times Square, which he felt were still places where "the whole sociological structure of the population can be found." Unfortunately, this social layering was not to last; the taming of Forty-second Street soon began in earnest with the banning of peepshows in 1985. By the end of the 90s it was all over.

Fassbinder's approach to technique was double-sided. On the one hand, he gave the film a conventional form in order to foreground the characters and the reality portrayed. His priority was to reflect the viewers' own conditions of life, not shock them into "rejecting the whole thing at first sight" (the way, say, Syberberg might). On the other hand, he refused to adopt television aesthetics, leading to notoriously dark scenes with characters barely visible as contours (a choice he justified with a none-too-modest comparison to Rembrandt) and deliberately unsuspenseful segmentation. For all that, the story—with its rackets, burglaries, and fascist-bashing—is pretty exciting, and Xaver Schwarzenberger’s camera dances around enough to keep you awake.

MoMA ’s second and final screening of this massive movie starts today at 1pm and continues until 10:30 tomorrow evening. Get your diapers on, pack a dozen Clif bars, and go watch an ensemble cast of your favorite Fassbinder stars, including Gottfried John, Barbara Sukowa, Hanna Schygulla, Hark Böhm, and Volker Spengler, hawk, hustle, and heil their way through both the glamor and the banality of late 1920s Berlin.