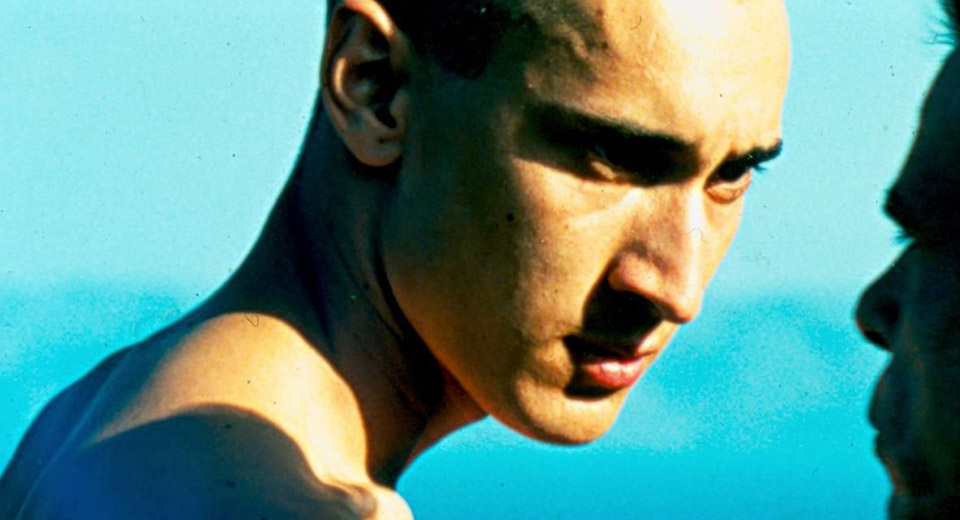 In his 1920 treatise A General Introduction to Psychoanalysis, pioneering Viennese headshrinker Sigmund Freud speculated that "fearlessness and bold daring arise from free gratification of sexual desires," before noting, unfortunately, that "these relations are altered by various influences of civilization: for the average human being, it is true that anxiety and sexual constraint belong together." With a palette that commingles the sickly green tint of envy with lust's rosy blush, Claire Denis's Beau Travail lays before us Freud's theory writ large: a mélange of brooding appetites, where the inner strife of unanswered desire builds to a conclusion of quiet, tragic violence. Her windswept adaptation of Herman Melville's Billy Budd transports our players from 19th-century whaling vessel to remote Djibouti outpost of the French Foreign Legion – a world apart from any "feminising" social order, inhabited by men of stark morality and scant apparel.

As an object of desire, Melville's Billy Budd exists on a plane higher than the baser aspects of man's sexuality. A towheaded foundling, beloved and sheltered by his shipmates, Budd's very presence signifies all that is pure and beautiful, righteous and good. He receives his punishments in a Christ-like fashion, and it is this very fashion that makes his eventual fate so painful. Denis' adaptation transplants this soft boy's martyrdom into the vacant soul his longing superior, Chief Adjutant Galoup, standing in for master-at-arms James Clagett. The second-fiddle to his more popular commanding officer, Galoup spends his tour of duty in a sun-baked purgatory, coolly observing the same dozen khaki-clad legionnaires as they perform pointless military drills, iron their shirts, and grind at the local village night club. In the taut form and slight build of mega-star Denis Lavant, Galoup's doleful, taciturn bureaucrat is at once pathetic and sinister, his yearning for acceptance matched only by a hungry-eyed obsession with lithe recruit Gilles Sentain (Grégoire Colin).

Agnés Godard's cinematography elevates Melville's winsome subtext to the text (and then some!), observing Galoup's statuesque underlings with an intimacy so up-close, so personal, you can almost smell it. Denis and Godard invite us to revel in this pulchritudinous ensemble as they stand at attention in the glaring sunlight, vault over an obstacle course, or simply jostle in close proximity against an endless expanse of blue sky. It is an appetizing tableau, to be sure, but we can only "look with our eyes, not with our hands" (or mouths). The map of Galoup's visage leads everywhere, and nowhere, purposefully obscuring any tidy resolution to his journey of self-examination. In the twenty years since Beau Travail's release, countles linguistic and sexual floodgates have opened, granting us free reign to name our desires. But this propinquity is deceiving: are we any closer to Freud's ideal of "fearlessness and bold daring"? Or is this nearness a mere mirage?