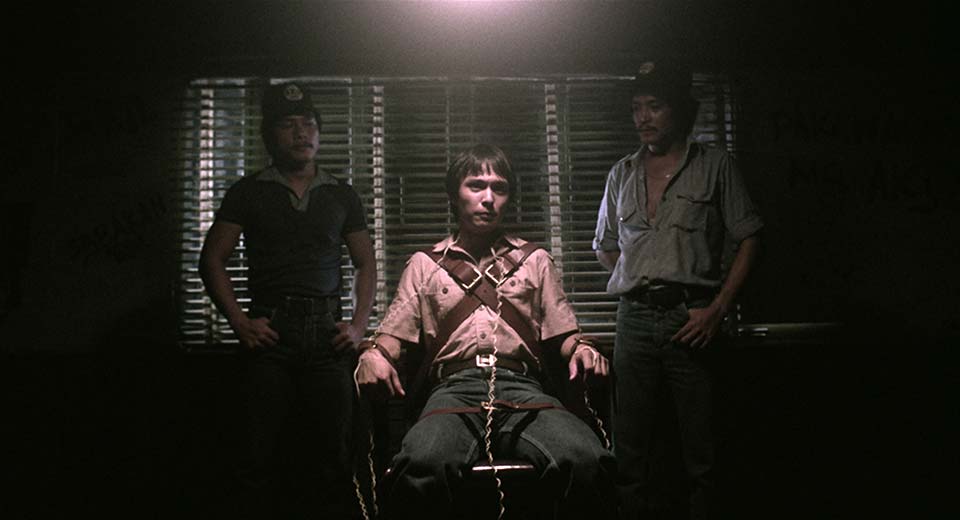 College fraternities may seem to be a quintessentially American disgrace, so one of the initial shocks of Mike De Leon’s 1982 Filipino hazing drama Batch ‘81 is learning that the performance of, and submission to, juvenile rites of wanton, irresponsible cruelty for the sake of sublimating individual identity to the ostensibly red-blooded yet latently homoerotic alpha male herd mind in exchange for drinking buddies is apparently an international universal. In any case, the tone is less Animal House than Salò in this fairly explicit parable for Ferdinand Marcos’s dictatorship, which premiered at Cannes and swept the Philippines’ film awards in the later years of martial law. It’s virtually unknown in the United States, where audiences will have a chance to see a new 4K version in MoMA’s “To Save and Project” series courtesy of Singapore’s Asia Film Archive and Italy’s L’Immagine Ritrovata.

Sid Lucero (Mark Gil) is a pre-med student who pledges to the Alpha Kappa Omega fraternity in order to make new friends. An initial pledge group of more than a dozen is quickly whittled down to eight, and social pressures among the remaining young men intensify alongside increasingly fraught and dangerous initiation rites, which range from paddling and streaking to a perverse enactment of a Milgram-inspired torture experiment. (Ironically, the actor who portrays the fraternity founder supervising the trial was the brother of Marcos’s then-defense minister.) It culminates in a violent gang brawl, at which time its apparent that Lucero’s transformation from reluctant neophyte to pack leader has come full circle.

The tone of Batch ‘81 is resolutely sobering, never veering into leering exploitation despite the tigger-happy hijinks. Its urgency is no doubt due in part to the personal investment of prolific producer Marichu Maceda, whose own son was seriously injured in a fraternity initiation, and the campus research of screenwriters Clodualdo Del Mundo Jr. and Raquel Villavicencio. The closest the film achieves to a sense of levity are the oblique—and occasionally explicit—references to the playful transgressiveness of A Clockwork Orange, including a delightful soundtrack that is a dead ringer for Wendy Carlos’ Switched-On Bach, and a character in droog makeup during a fraternity talent show that includes a Swastika-laden performance of songs from Cabaret. Remarkably, the filmmakers’ only concession to self-imposed censorship was apparently an excised disco rendition of “Don’t Cry for Me, Argentina.” Despite being one of the most obscure entries in MoMA’s series, it is—and so exhausting to admit—as relevant as ever in the age of monsters like Rodrigo Duterte and his mutual man crush, the disgusting pig President of the United States.