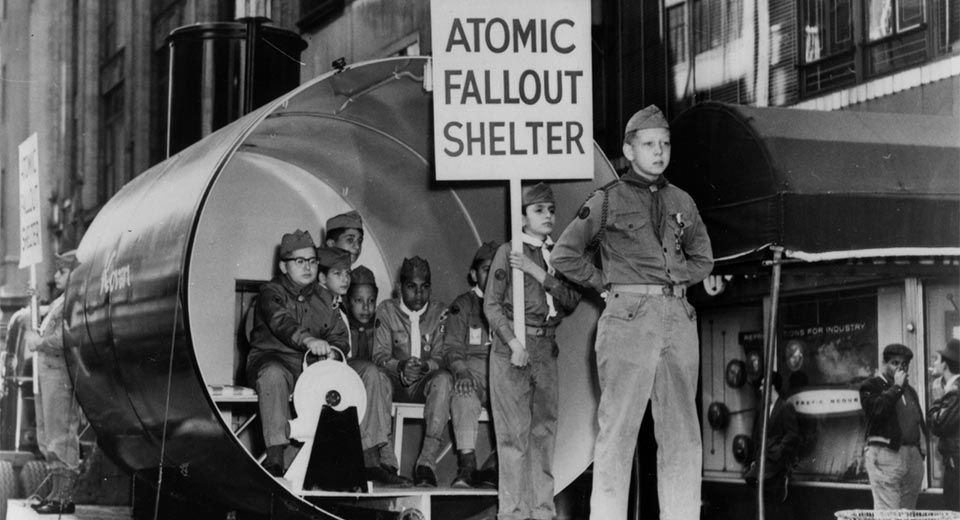 A spruced up Film Forum reopens its doors this week. And – forgive the irresistible pun – it does so with a bang! Over 30 years after its initial run, The Atomic Café (1982) is back at the theater in a sparkling new 4K digital restoration. Wryly stitching together government propaganda, newsreels, training films, educational shorts, and advertisements, the film weaves a playfully dark tapestry of Cold War American culture with all its earnest paranoia, misguided directives, and dizzying absurdity.

The Atomic Café begins with sober titles. It is July 1945 and the United States is fighting a losing battle in the Pacific. In the desert of Los Alamos, the government is testing a secret weapon poised to turn the tide of the war. Trinity is a success and the bombs are whisked away by fighter pilots to be dropped on unsuspecting Japanese civilians. Democracy triumphs! Or does it? Here the directors brilliantly let the footage speak for itself—co-director Jayne Loader has aptly characterized the film's editing of nonfiction footage as "compilation vérité"'—as America seamlessly slides from one war into another. The specter of Soviet expansion and quotidian threat of atomic annihilation hover like a mushroom cloud over the American psyche. Mobilization once meant collecting scrap metal, now it is visualized in a young boy casually riding a bike in a gas mask. A cartoon turtle in a helmet enthusiastically demonstrates the era's iconic posture—duck and cover. Folksy tunes, with titles such as "Jesus Hits Like an Atomic Bomb," are interspersed throughout the film to add an ironic tonal effect. The film's culminates, appropriately, with a nuclear attack. A cartoon bomb descends, civilians dive for cover, bombs explode, and fires rage, scorching the earth. In the aftermath, a father instructs his two children: "We better clear up the broken glass and all this debris. All in all, I say we've been very lucky around here. Nothing to do now but wait for orders from the authorities and relax." A ukulele ushers in the closing credits. The patriarch's blind faith in the State produces, perhaps, a less overtly vituperative attack on authority as Peter Watkins' docu-horror classic The War Game (1965). Yet The Atomic Café's appropriation of government and instructional footage packs a similarly subversive—explosive?!—punch.

Lest the sober subject matter put you off, The Atomic Café is funny—often laugh out loud funny. It also, regrettably, feels cringeworthy in its renewed relevance. At the restoration's recent New York City premiere as part of IFC's annual "Stranger Than Fiction" documentary series, co-director Pierce Rafferty quipped, "the threat of World War III is a terrible way to promote your film." But history is a strange beast. Perhaps if, and when, today's political dust settles (hopefully this is only figurative dust), we'll feel comfortable approaching this moment with a similar strain of dark humor. Maybe The Atomic Café's clever approach to its subject matter will inspire a future intrepid filmmaker to sift through archival wreckage and construct a sequel of sorts, a Trump Café, where we can gather to celebrate the demise of this fake news-peddling regime.