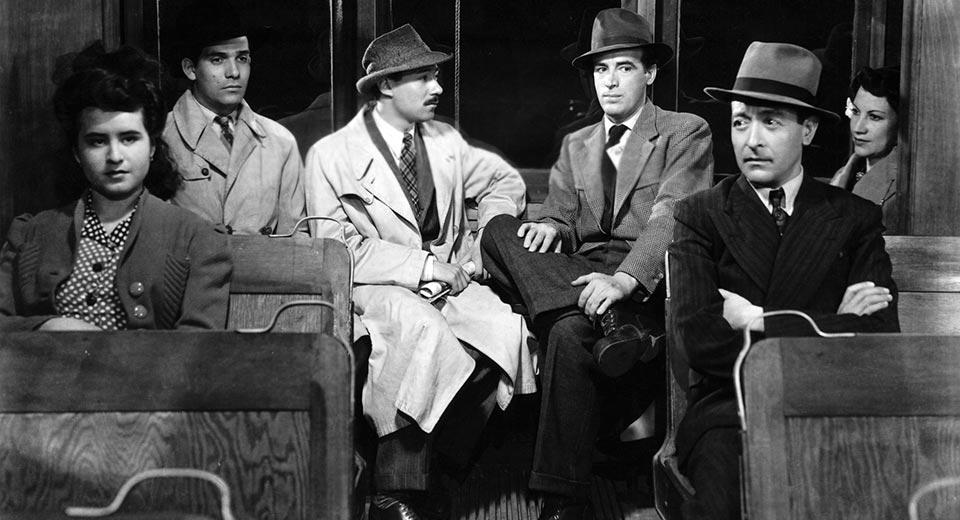 Julio Bracho, considered one of the most important directors of the Golden Age of Mexican cinema along with Emilio "El Indio" Fernández, is being venerated at the MoMA over a weeklong retrospective. The thirty-year ban on his last important film, La sombra del caudillo (1960), put him out of work and he died forgotten and depressed in 1978. Now, several new restorations are putting his name on the marquees of major cultural institutions on both sides of the border.

Bracho’s first major feature, Another Dawn (1943), based on a play by expat Spanish author Max Aub, is part melodrama, part spy thriller. Set in a brash and cosmopolitan Mexico City, its energy comes as much from superstar cinematographer Gabriel Figueroa’s high-contrast compositions and constantly moving camera as from the lights and sounds of the metropolis. A corrupt governor’s thugs tracking a labor organizer determined to topple the current government by exposing a major scandal at its highest levels provides the suspense, while the hero’s chance reunification with a flame from his college days—now unhappily married—supplies the tears and pathos.

Figueroa’s camera dollies in and out for dramatic effect much more frequently than is customary for films of the period. Near the beginning Octavio (Pedro Armendáriz), the pursued union leader, ducks into a dark movie theater and we follow his screen-framed silhouette down the aisle, then that of the utilities inspector hired to tail him, then that of Julieta (Andrea Palma) who gets up to hide in the señoras’ room. (The film on the screen is Bracho’s directorial debut ¡Ay qué tiempos señor don Simón! (1941), a “musical exercise in Porfirian nostalgia” according to film historian Carl J. Mora.) Then right near the end, when the governor’s goons and Octavio’s worker-comrades face off in a 19th century train station worthy of Manet, a low-angled camera alternates between slow dollies toward the two grim-faced teams, one with its pinstriped suits, the other with its overalls and monkey wrenches.

The political destiny of Mexico is one of Bracho’s explicit concerns as a storyteller. Octavio’s embittered former schoolmate, now a struggling leftist critic writing essays on the literary classics of the Americas for pittance commissions, complains that these days “A taxi driver earns more than a teacher.” A man in politics on the other hand—like Octavio—is said to live an exciting and robust life, “famous, feared, and persecuted” for his courageous work. It’s in the context of male career choices that the theme of the war between the sexes is formulated. Women’s highest ambition is love, while men can aspire to justice. Whenever characters gaze into the distance—and they gaze into the distance a whole lot—the men are looking toward a bright political future while the women see at most a promise of domestic harmony.

The language of gazes is an important part of Another Dawn, as it is of any melodrama. A wistful diagonal stare over the viewer’s head—or sometimes almost directly into the camera—signals dreams perhaps never attainable in a life fettered by social convention, class barriers, or the law. Still, Another Dawn is not a pure melodrama, but a kind of romance-oriented proto-noir with musical numbers, which also qualify it for inclusion in the distinctly Mexican genre of cabareteras. A good third of it takes place in Julieta’s night club, with an entire performance by an Afro-Cuban band headed by a Sammy Davis-lookalike.

It’s as difficult to fit Another Dawn into a neat generic category (the coveted envelope is a pure McGuffin à la Hitchcock while the morbid grandfather clock coffin gag is straight out of Chaplin) as it is to label Bracho’s output. Starting out with a musical, then detouring through thrillers and romantic comedies to bitter political satire, Bracho was more resolute in refusing his assigned lot than his heroine in Another Dawn , whose ultimate moral choice in the train station is tragic in both its inevitability and its ambiguity.