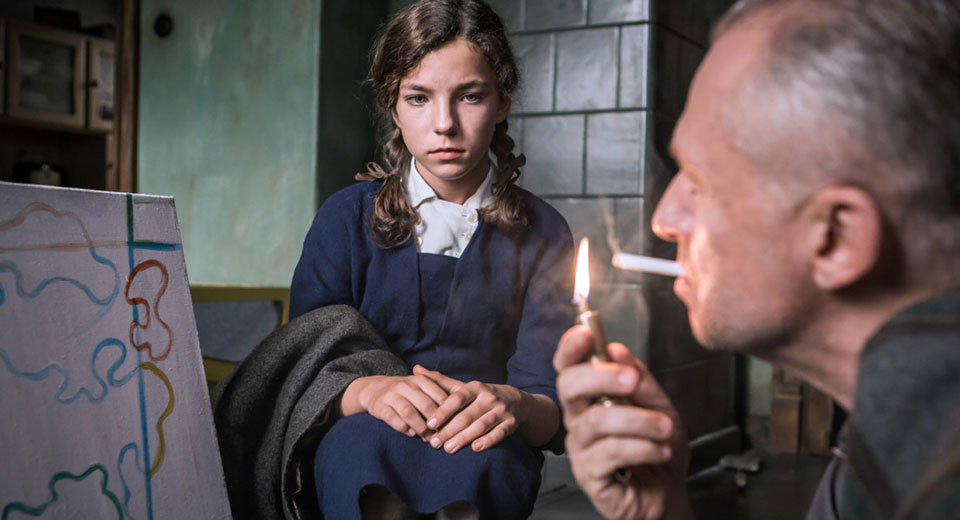 Legendary Polish director Andrzej Wajda, whose filmmaking spanned seven decades, died right after finishing Afterimage (2016), which starts a run at FSLC today. A more fitting culmination to a career as varied as his could scarcely be imagined. In 1973 Bołesław Michalek could still describe Wajda as an essentially “parochial” Polish filmmaker, “a creature of her history, her mythology, and her art,” but his horizons would expand in pan-European co-productions like Danton (1983) and The Possessed (1988) with their international stars (Gérard Depardieu, Isabelle Huppert, Omar Sharif). Still, the history of Poland was Wajda’s abiding obsession; A Generation (1955), Kanał (1957), and Ashes and Diamonds (1958) portrayed the war and its immediate aftermath, while Man of Marble (1977) and Man of Iron (1981) focused on the Free Trade Unions and the rise of Solidarity. Wajda’s hard return to the immediate postwar years in Afterimage is tinged with autobiography—he studied in Łódź in the early 1950s—making it a perfect epilogue to his corpus, both historically and personally.

On the textual level, Afterimage is about the twilight years of avant-garde painter Władysław Strzeminski (Bogusław Linda), whose aesthetic intransigence in the face of the doctrine of Socialist Realism landed him in disrepute, destitution, and untimely death by 1952. (The title is taken from a set of paintings he made in 1948, also called “solaristic” compositions.) Subtextually it concerns the fate of cultural production in contemporary Poland, where the governing Law and Justice party has imposed a cultural policy aimed at “the strengthening of the crumbling and ever shredding communal bonds of the nation.” Ironically, the policy’s opposition to the homogenizing effect of American pop culture makes the charge of “cosmopolitanism” as common under the current administration as is was under Communism, a government that Law and Justice strongly repudiates.

The form and content of Afterimage are at loggerheads; unlike Strzeminski’s avant-garde doctrine of Unism, Wajda’s storytelling is traditional. Casting gorgeous supporting actors (like Zofia Wichlacz as Strzeminski's fawning young assistant) and opting for an emotionally manipulative score (with plaintive strings to emphasize the cruelty of Strzeminski’s destruction) are time-worn tricks. Luckily Marek Warszewski's production design is so meticulously gritty that we really get a feel for postwar Łódź, with its bullet-riddled 19th century facades and the accumulated grime and cracked plaster of Strzeminski’s austere studio.

Since the revolutionary avant-gardes of the teens and twenties, with their emphasis on collective artistic production in the service of the masses, were replaced by the Socialist Realism of the thirties, which made their social utility into a stifling, mandatory template, the radically individualistic aesthetic doctrine that Strzeminski espouses in Afterimage has become hegemonic in the West. He urges his students, “Seek your own form of expression,” and “Paint in harmony with yourself.” Are we doomed to oscillate between government-dictated and purely narcissistic art practices, between the regulated art production of totalitarian societies and the mere self-expression of liberal democracies? Can’t art be integral to society without being a tax-funded mechanism in the bureaucratic machine? It’s ironic that in some European countries state funding is thought to guarantee artistic freedom, because whether the money’s coming from the king, the government, a corporation, or a private investor, every society has its system of patronage. Maybe it’s time to let go of the illusion of artistic autonomy and humbly admit that we’re dependent on others in everything we do.