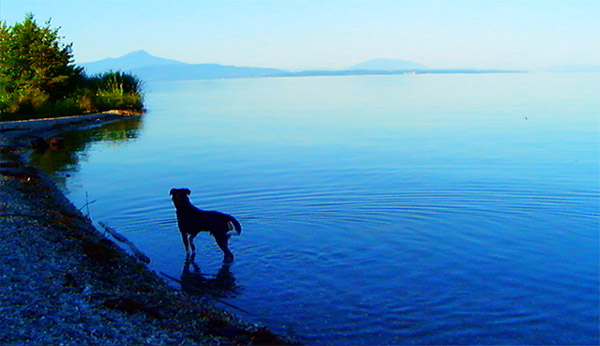 Adieu au langage is divided into alternating and interspersed sections titled Nature and Metaphor, the material in each section referring constantly to its antithesis and both coyly mediated by Godard’s established cinematic system of signs. 3D is a logical formal element for Godard to put to use alongside his usual parallel but occasionally incongruous streams of image and sound, translated versus untranslated utterances (one hears unsubtitled mention of Mao and Che), his characteristic abruptions (ie. dramatic strings, interrupted), and his employment of supplementary and shifting texts such as old films and philosophical works. All of these are coupled with his mischievous sense of humor and sincere political concern, with 3D giving Adieu au Langage a layer that is both highly aggressive, which is not unwelcome, as well as sublime. At certain points, Godard allows one of the two cameras which are capturing the 3D image to pan left or right to follow a moving subject, creating a superimposition in which only one subject can be seen if you close one of your eyes, resulting in a gloriously destabilizing visual experience to match his rugged conceptual terrain. In the screening I attended, the film elicited audible expressions of shock, illness and joyful excitement.

“Is society willing to accept murder as a means to fighting unemployment?” “Is it possible to form a concept about Africa?” “Everyone can stop god from existing, but no one does.” These and other questions and propositions are pondered by various characters, including those playing out a melodramatic meta-narrative involving a hit man, a woman and a getaway car against the backdrop of some of the drabbest corners of a provincial town. As in Film Socialisme, there is a ship, this time seen only from shore. Perhaps Godard became superstitious after the disaster that beset the Costa Concordia, on which Film Socialisme was filmed. Another man and woman endure a domestic drama in a small apartment, where they eat, defecate, watch variously mundane/shocking things on a television and ponder the nature of their subjectivity vis a vis language. Godard’s own dog appears, blissfully unaware of the cognitive and social constraints and mystifications of such systems of signification, and runs happily through the woods, pawing, scratching and digging. It also receives our sentimental projections, and we’re embarrassed at that.