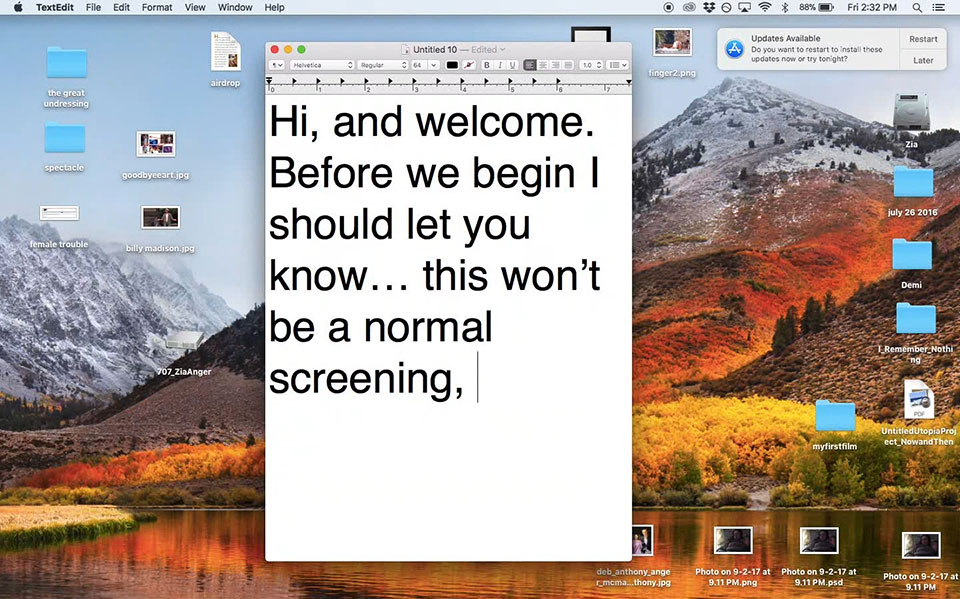 In early 2018, artist and filmmaker Zia Anger made a tweet expressing frustration that the Internet Movie Database, the algorithmically-appointed officiary of film history, had seemingly of its own volition declared her semi-autobiographical first feature film, Always All Ways, Anne Marie, “abandoned”. Anger was in the throes of attempting to fund a new feature, and despite years of experience and high-profile short films and music videos, she found herself being treated with a condescension reserved for “first-time” filmmakers.

But Always All Ways exists, regardless of what the internet has decried — it was just never accepted into any film festivals. That June, armed with a very long HDMI cord and some tactics devised by Anger while she was on the road performing with her collaborator, musician Jenny Hval — AirDropping images to the audience, live typing on a big screen and interacting with the internet in real-time — Anger showed the feature at the Spectacle Theater. She scrubbed through some parts and offered diaristic commentary in an open TextEdit window, her back to the audience. This performance ultimately became My First Film, which will be performed three times at Metrograph before embarking on an international tour with the support of Cinema Guild and Memory Studios. It shares DNA with both Anger’s My Last Film, a primal scream-slash-sardonic career suicide note from 2015, as well as her recent video for Jenny Hval’s “Accident”. Mainly, it functions as a reclamation of the labor, scars, and stories of a film lost to the crevices of the independent film market.

Before the first Metrograph screening, we met up with the filmmaker via Google Hangout:

20:23:05 [ML] so I'm not sure what form this will ultimately end up taking, but that seems fitting

but I am about to do 15. they asked me how many i could do before I maxed out and I made a guess and said 20. so all in all i'll probably have done about 25 when it's all done, since the first one you asked me to do.

20:28:33 [ML] that's amazing that it's turned into an international tour. I can't really even think of other comparable releases

20:29:31 [ZA] i still have no idea. we had to call it something so decided on something like expanded cinema performance

20:31:16 [ML] I mean I think the performance element is really interesting, because I've seen you perform live, on a stage with Jenny Hval which feels like a very different experience, both for you and a viewer.

20:31:47 [ZA] when I knew it could be a real thing and started developing it (after the first 2 shows) I always considered it 1/3 screening, 1/3 performance, 1/3 artist talk. so intellectually I understand it's a performance, but I don't prepare in the same way I would for a performance where I am moving my body.

20:33:29 [ML] I suppose it could've been closer to a lecture or monologue, which I didn't even really consider. the typing seems integral to it but I'm not entirely sure why.

20:34:43 [ZA] it's curious. people have told me they like watching the words come, they like the mistakes, they like going back and rereading and catching up again.

20:35:02 [ZA] i don't know what it is or what to compare it to, except for looking over someone’s shoulder when they are texting.

20:35:40 [ML] I love it! I think watching typing is thrilling in a way. like especially when there're typos, it's like suspenseful?

20:37:18 [ML] but at that same time, it dominates the whole screen -- like typing or texting is this small, personal thing. It isn't supposed to be that big, so when we see it without seeing you it's like your omnipresent, or godlike which I like.

20:40:10 [ML] is the typing in real-time exhausting? is it just a constant struggle to keep up with what's on screen? or do you have the frame of mind to like, engage with it live & enjoy it?

20:41:32 [ZA] but upon reflection the part I liked most about it was the godlike feeling it gave me

20:42:36 [ZA] it doesn't make me feel godlike, but there is certainly a thrill that I haven't felt since my adderall days

20:43:28 [ML] do you / did you feel that way on set as a director at all? I think a lot of people ie men would probably make that comparison

20:44:42 [ML] or is it more about the ability to engage with the audience directly

20:49:19 [ML] a lot of the things you talk about in the show that cause you stress & anxiety on set are, like, things that I would hope any human would worry about -- where is the money coming from / are my cast & crew safe

20:49:45 [ML] and obviously the vast majority of the film world... does not actually care about those things

20:52:25 [ML] the piece changes, like in very slight variations, with each iteration I've seen and I've been wondering if that's from workshopping & gauging reactions, or is there an element of like, what you feel like typing about on that given day

20:53:52 [ZA] it's interesting. I hate working alone. I hate writing alone. I've never been able to practice lines, or a different language on my own self-determined time.

20:54:38 [ZA] but after I did the show a few times I just knew there was more. the connections were literally on the tip of my tongue, and I finally sat down and workshopped the writing in a really meaningful way.

20:55:47 [ZA] of course I have done that with scripts, but it always is so painful. this was different. because the writing had the potential of being the piece’s final form I really had a good time (as opposed to a script, with you hope doesn't die on the page)

21:01:32 [ML] the ephemerality of it at this stage has been really trippy. like I'll be talking to someone who saw it at Metrograph and mention something that I forgot only happened in Indie Memphis, etc. the story of watching your lead actresses running on the icy pier from a distance, for instance, has like really haunted me and I can't even remember which that was from at this point

21:02:37 [ZA] yeah, i do think the ephemerality of it is a really important part of its success

21:04:41 [ML] you said something once about how your temperament was closer to that of a musician & this does have that aspect of "touring" like you're goin out and playing the hits every night

21:05:18 [ML] has that changed your perception of / relationship to the Always All Ways, Anne Marie in any way?

21:06:15 [ZA] I think when I made AAWAM I was very aspirational. I did not like sitting through 2+ hr long movies, with very little dialog, and yet I aspired to make a film like that because I admired those filmmakers, or maybe because all the people around me admired them. I just wanted to be accepted in that way.

21:09:54 [ZA] even when I was making it everyone said "this is really a maximalist idea... the worms, the letters, the voice over, the multiple formats"

21:12:01 [ZA] i think I saw some sort of traditional acceptance into the film world as a way out of all that stuff

21:12:17 [ML] is it difficult to now have to watch so often? does the performance make it more of an object to you?

21:13:05 [ZA] sometimes I'm still dealing with the same things I dealt with making that film

21:13:36 [ZA] mostly though, the performance and the film just allow me to have great conversations with people

21:15:57 [ML] because this project imagines kind of a utopian space that precludes like, the "industry" from the performance and is kind of anti-film festival... is it strange to now have to be perform it at so many festivals?

21:16:29 [ZA] I would say what is funnier is having been rejected by festivals

21:16:41 [ZA] some of the same ones that rejected the original film the first time around