A Zed and Two Noughts 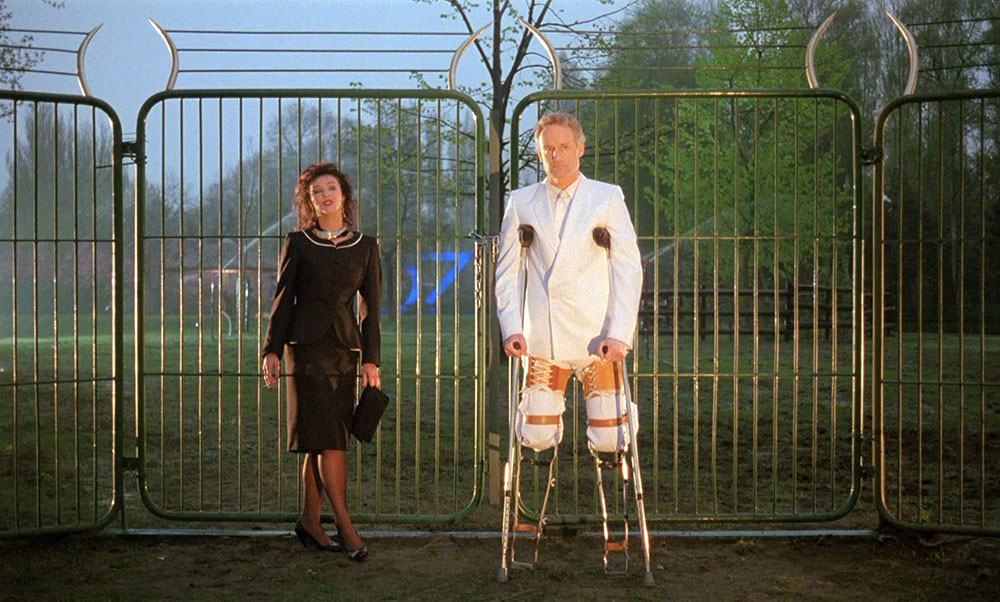 Even back in 1985, Peter Greenaway had long thought about centering a film around a zoo. His work to that point frequently included pastoralia and animals, which he attributed to growing up with a naturalist father specializing in ornithology: “From childhood on I was literally brainwashed into sharing this interest. I resisted, but it still stayed with me.” Pushing against his upbringing and fears of a sophomore slump following countryside murder mystery The Draughtsman’s Contract (1982), a zoo was the perfect focus—what could be less natural? These pseudo-scientific sideshows are the physically and taxonomically carceral junction of man and nature, an environment made more vicious and visceral through forced proximity of man and animal. Zoos also lent easy amplification of what would become a throughline for Greenaway, entangled sex and death. The resulting reflection was A Zed & Two Noughts.

On tour in support of The Draughtsman’s Contract, Greenaway made a point of visiting zoos in nearly every city he passed through. The sights that struck him hit viewers in the opening moments of A Zed & Two Noughts, and with typical Greenaway metatextual bombast, tell the entire film and its major themes in coded sum. A tiger paces a too-small cage. An amputee ape lopes by. A zebra’s severed, rotting head. They’re bracketed by Greenaway’s metafiction of men studiously, fruitlessly documenting it all.

If The Draughtsman’s Contract was about fine art—the commission and creation of it, film as means to replicate it—A Zed & Two Noughts is about (among other things) film as a medium, its origins, its potential to transcend the lie of “history” through time manipulation. A Zed & Two Noughts marks the first of many collaborations with cinematographer Sacha Vierny, who also worked with Greenaway’s favorite filmmaker Alain Renais. Greenaway claims he and Vierny came up with twenty-six (how convenient) sources to light scenes by and attempted them all, even by rainbow in the film’s final shot. There are nods to Muybridge and Vermeer as proto-cinema. Following their wives’ deaths in the swan-induced car accident, twin brothers Oswald and Oliver obsessively parse film for answers to life’s absurdity, recording stop-motion sequences and watching David Attenborough’s Life On Earth series in a theater.

It’s a film about symmetry that’s intentionally off-balance, and as with Greenaway’s entire career, points out the futile absurdity of systems and categorizations (“Alpha, Beta, Gamma. I wanted twenty-six children.” / “There aren't twenty-six letters in the Greek alphabet, there's only twenty-three.”) A Zed & Two Noughts especially undermines ideas of auteurism and control, from the amputation-happy surgeon trying to mold earthy accident-survivor Alma into a perfect (legless) Vermeer, to husbands trying to rationalize their way out of grief by studying decay and analyzing evolution. Some critics deride Greenaway generally and A Zed & Two Noughts in particular as the cinematic equivalent of an overeager grad student’s syllabus-dropping, but the blatant references here are part of the humor, more obvious in silly bits like surnaming the twins Deuce.

Greenaway claims after he presented A Zed & Two Noughts at TIFF, David Cronenberg “sat me down in a hamburger bar and questioned me for two hours. .‌ . . Eight months later he made a film called Dead Ringers (1988), which is about twinship, mutilated females, and human mutation.” Evolution and mutation are two sides of the same coin, it comes down to whether the change proves advantageous. Despite their commonalities, there’s no mistaking the films. Though Cronenberg isn’t traditional by Hollywood standards, his codependent character study spiced with taboo is a straightforward three-act narrative using the same visual grammar as D. W. Griffith. A Zed & Two Noughts is as much a film as “a film”, the first embrace of cinema qua cinema from a self-professed fine artist stepping beyond his early-career formalism to explore the medium on its own terms.

N.B. The roles of Oliver and Oswald were originally offered to the Quay brothers, who previously appeared in The Falls. They demurred, but appear uncredited in one of the film’s many mirroring tableaux playing cards.