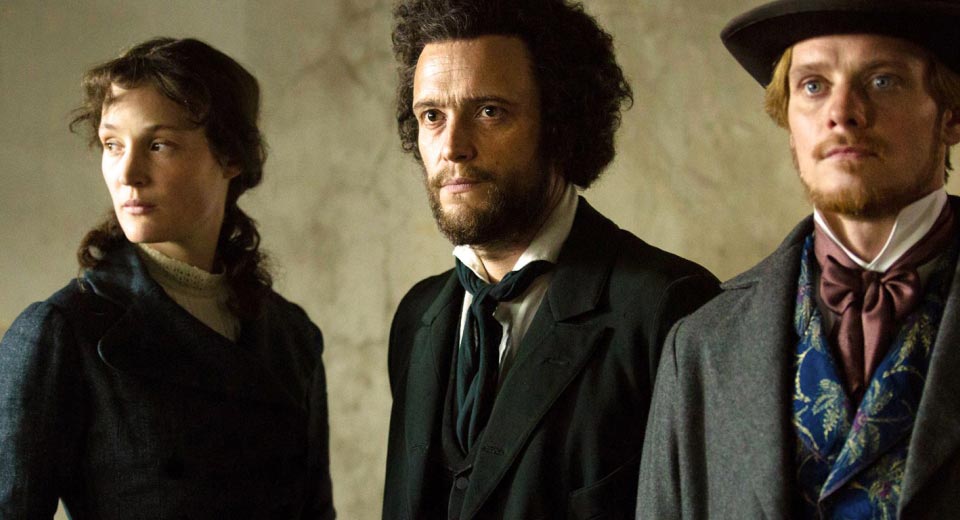 Raoul Peck's previous films had gotten attention on the festival circuit (including his 2000 biopic of the Congolese anti-colonial fighter Patrice Lumumba, currently playing at Spectacle Theater), but with its long passages of James Baldwin's previously unpublished prose (spoken by Samuel L. Jackson in a restrained tone devoid of his distinctive histrionics), I Am Not Your Negro (2016) strove for a broader demographic.

Now, with a film he worked on concurrently with last year's surprise hit, Peck returns to a more modest scale of exposure. The Young Karl Marx is firmly in the tradition of historical biopics with too little runtime for patient exposition, its protagonists introduced with implausibly succinct summaries of their achievements. Marx (August Diehl) first meets his philosophical bosom-buddy Engels (Stefan Konarske) in an exiled editor's drawing room; after a minute of tense sizing-up, they start heaping praise on each other's debut works (Critique of Hegel's Philosophy of Right and The Condition of the Working Class in England). Haughty posturing dissolves into an intellectual bro-out as the young radicals commiserate about monarchy and exploitation over half-liters of lager. Marx holds Engels's hair back as he produces an impromptu Critique of Everything Ingested That Day , then says, "You know, Engels... Until now, philosophers have only interpreted the world. The point is, rather—" and the rest, as they say, is history (not to imply that the preceding was not history).

Other 19th century commie celebs include Pierre-Joseph "Property Is Theft" Proudhon (Olivier Gourmet) and Mikhail "No Gods, No Masters" Bakunin (Ivan Franek). With 20/20-hindsight, Peck winks at the audience through Proudhon's warnings to Marx about smashing an old religion only to found an even more intolerant one ("Don't become another Luther.") The analogies between Marxism and protestantism are compelling, but we don't need this smug feeling of "Yeah, he really should've known better than to spread a secular religion that a century later would be oppressing half the world."

Peck's film is a welcome sign of the mainstreaming of Marxism, and there should be more movies like it (or maybe a Downton Abbey-style multiple-season family drama). I'd like to think that in five years Marx won't have to be depicted as either a hero or a villain. The Young Karl Marx casts him as a flawed man torn between revolutionary ambition and domestic happiness, but Peck could have dared to rock the aesthetic/formal boat a bit harder.