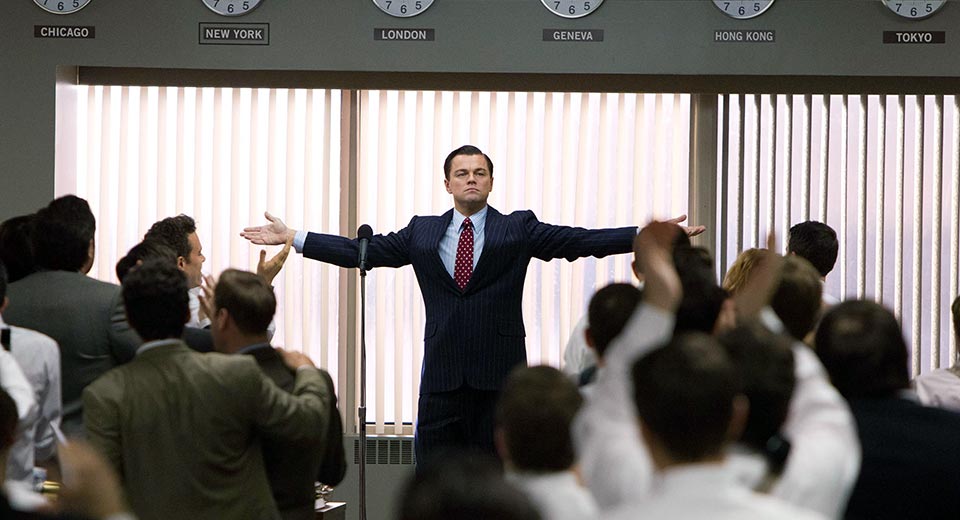 In The Wolf of Wall Street (2013), Martin Scorsese’s routine of elevating despicable swindlers to the status of tragic heroes (Goodfellas, Casino) collides with the minor vogue in post-2008 finance industry movies, resulting in a major dissonance between our reluctant admiration of the protagonists and our slowly expanding knowledge of their shameless practices.

On the one hand, we are given to understand that Jordan Belfort (Leonardo DiCaprio), the Queens-born self-made stock market millionaire whose memoir provided the material, is a narcissistic bigot for whom no expedient to getting rich is off-limits, no matter how exploitative or dishonest. On the other, he’s just a young man behaving badly, a Prodigal Son whose worst excesses should be either forgiven or understood as flaws that make him human, like the rest of us.

Two questions keep nagging at the viewer: (1) How does Scorsese manage to make this asshole likable? and (2) Why? The first is easier: Scorsese’s signature visual tricks (slow motion, whip-pans, virtuosic Steadicam shots) guarantee excitement and immersion, like a shameless stockbroker dazzling us with his mile-a-minute sales pitch about a bullshit investment; the nigh-uninterrupted playlist of classic R&B and Chicago blues that dips every Scorsese movie in Mean Streets syrup; and—most obviously—Belfort’s snarky voiceover narration that appoints us his confidants. The second question is moot, but we might speculate that Scorsese actually sympathizes with Belfort-types and seeks to glorify their addictions (money, women, drugs) on behalf of rich men everywhere.

Unlike Adam McKay's’s The Big Short (2015) Wolf makes little attempt to demystify the financial mechanisms that stockbrokers use to cheat ordinary Americans out of their money on an epic scale (every time Belfort starts explaining something like CDOs, he breaks off with something like “But you don’t care about this shit anyway”). Belfort’s real-life demagoguery is effectively repeated by Scorsese, who—using the same appeal to the baser instincts—tries to convince us that getting filthy rich by destroying people (whether by bankrupting them or literally raping them) is awesome. And unlike Paul Bettany’s “Fuck normal people” monologue in Margin Call (2011), Wolf's moments of moral clarity are deployed cynically, as when Belfort tells his FBI nemesis ( Kyle Chandler ) that the real crimes are happening at the established Wall Street companies like Merrill Lynch and Lehman Brothers, and that upstarts like him are actually undermining this corrupt system from within.

Although we’re shown that the testosterone- and cocaine-fueled financial system ruins people’s lives both officially (by selling them bad stocks) and unofficially (by degrading them as prostitutes and servants), we’re ultimately told “boys will be boys,” as if these people can’t help it. They’re not portrayed as monsters, parasites, or enemies of the people, but as deeply flawed heroes. This is what makes movies like this dangerous. Obama couldn’t have been elected if it wasn’t for Morgan Freeman laying the groundwork; could Trump have won the vote without The Wolf of Wall Street ?