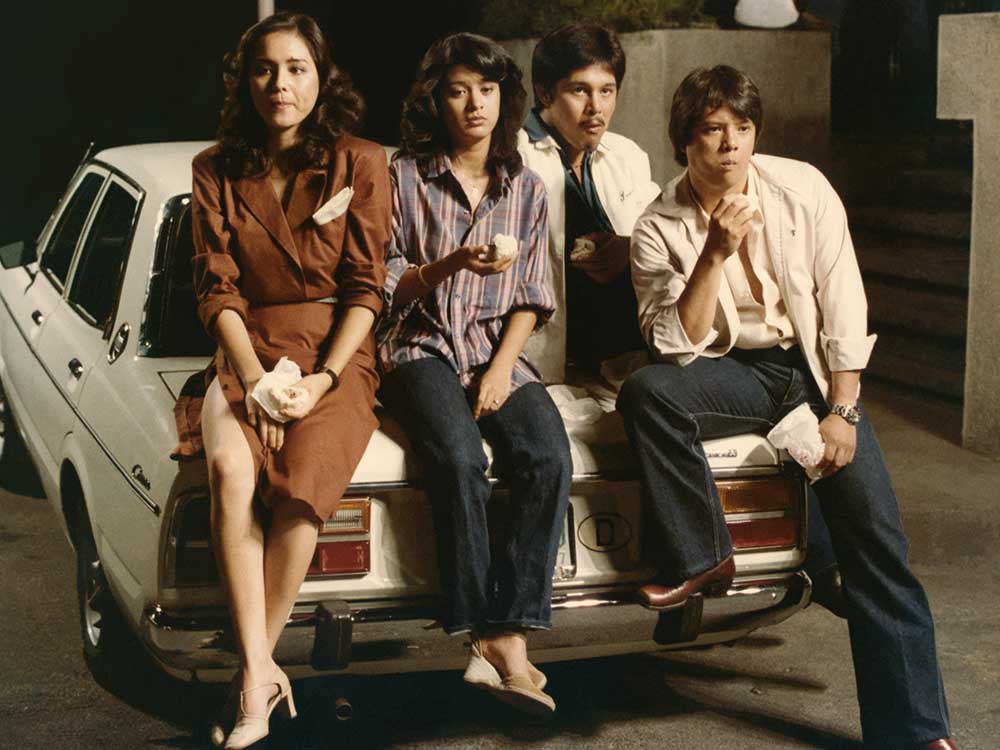 An absurdist musical caper laced with Mike De Leon’s signature social critique—this time aimed at Catholicism, encroaching economic imperialism from foreign powers, and mass media consumption—Will Your Heart Beat Faster? (1980) would prove to be a turning point in the filmmaker’s career. De Leon’s most commercial effort yet marked the first collaboration between the director, Clodualdo “Doy” del Mundo Jr. and Raquel Villavicencio, the trio that would go on to write the critically acclaimed Kisapmata (1981) and Batch ’81 (1982). De Leon had been dubbed an experimental filmmaker by critics, a label the director would later reject, saying he was simply willing to try something new. Will Your Heart Beat Faster? strayed from the psychological horror of his debut Itim (1976) and the melodrama of Moments in a Stolen Dream (1977), finding inspiration instead in musicals.

Led by Christopher de Leon’s charismatic turn as pop singer Johnny, this Pinoy classic rounds out an all-star billing with Charo Santos as the quick-witted air hostess Melanie, Jay Ilagan as Johnny’s pal Nonong, and Sandy Andolong as Nonong’s girlfriend Nancy. When a strange audio cassette is slipped into Johnny’s jacket during his return flight from Japan, this clueless group is drawn into a conspiracy involving the Japanese yakuza, the Chinese mafia (headed by a caricature of Regal Entertainment’s Mother Lily Monteverde), and fake nuns and clerics. Chinese and Japanese subtitles playfully vie for space on the silver screen, slapstick abounds, and non sequiturs constantly interrupt as De Leon constructs a farcical and surreal narrative (with plenty of subtext) that culminates in a gonzo rock-opera finale. The film doesn’t shy from controversy or criticism: its portrayal of foreign powers plays heavily into negative stereotypes and caricature, replicating the pitfalls of ethnocentrism while hinting at the Philippines' history of imperialistic social and economic meddling from more developed nearby countries. Appreciation for the film has not flagged elsewhere, however; its restoration was programmed in both Japan and Hong Kong.

Will Your Heart Beat Faster? would come to be the final production of LVN Pictures—the major production house founded by De Leon’s grandmother Narcisa De Leon (better known as Doña Sisang) that once accounted for nearly half of all Philippine film productions. Perhaps it was fitting to end on such a note. The film’s final conjugal scene purposefully recalls the first film of LVN Pictures, Giliw Ko (1939). But for a studio founded on Catholic morals (De Leon’s grandmother had posited a puritanical cinema), the final production turned these founding principles on their head with its religious satire, hallucinogenic trips, and ribald sexual politics. De Leon would later remark, “Strangely enough, it was only in the wild and surreal Kakabakaba Ka Ba? [Will Your Heart Beat Faster?] that I discovered the power of satire and protest (masquerading as comedy).”

Will Your Heart Beat Faster? screens today and tomorrow, November 25 and 26, at the Museum of Modern Art as part of the series “Mike De Leon: Self-Portrait of a Filipino Filmmaker.”