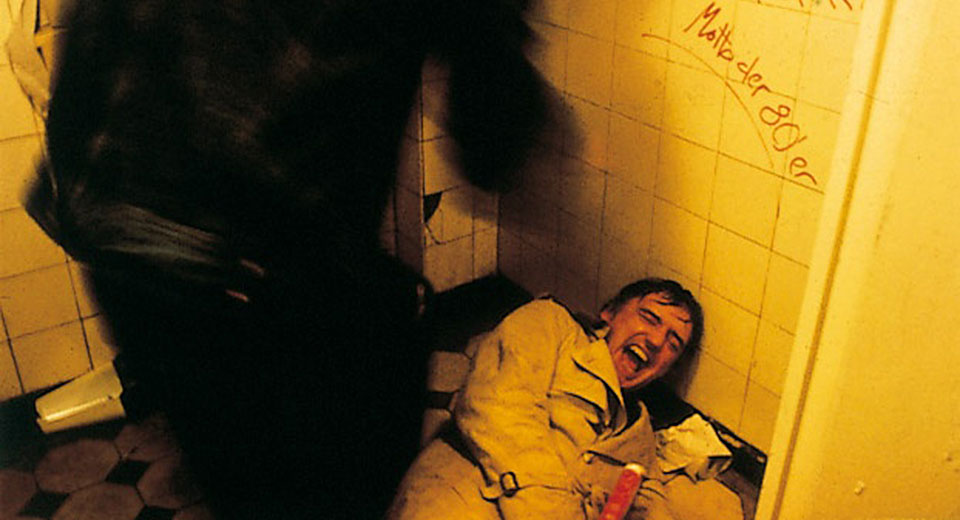 It’s the final day of the Dark Hopper series programmed by me and Ava Tews at Anthology Film Archives,  and the last chance to catch a rare 35mm of White Star —the darkest of the Dark Hopper films, in terms of both the intensity of his performance and the obscurity of the film.

It’s worth prefacing: White Star is, at least ostensibly, not a great film; and yet it’s (to date) the swan song of a completely unheralded great director. I learned about Roland Klick while researching films soundtracked by the band CAN, and when I endeavored to launch a modest retrospective of Klick's work at Spectacle in early 2012, I was fortunate that it dovetailed with fledgling efforts by Frieder Schlaich and the critics and filmmakers associated with Revolver /the Berliner Schule to bring his films back to light in Europe. It’s fair to say his obscurity in the U.S. was (and mostly remains) total: although White Star had previously shown at Cinefamily as part of their own Hopper retrospective, at the time, I was told that my critical summaries of his films may have been the first English-language writing about them, and to anyone’s knowledge, none of the others had screened publicly in the U.S. What was surprising to learn was that Klick had similarly been marginalized in Germany: deeming his films too commercially oriented, apolitical, overly aestheticized, and therefore a threat to the system of West German state funding for film production, many of the filmmakers associated with the New German Cinema made a point of undermining him. Notoriously, mid-festival, on the eve of the Cannes premiere of Klick’s incredible, narratively minimalist acid western Deadlock , several well-known German filmmakers successfully threatened to boycott the festival in order to have Klick’s film pulled. His next film, Supermarkt , is an unequivocal masterpiece considered by some to be the greatest German film ever made. It’s a singular mix of unflinching social realism and aestheticized crime that also has the distinction of Jost Vacano’s proto-Steadicam, long take photography that completely dazzles while challenging prevailing historical narratives about the development of cinematography.

And then we arrive at White Star: Klick’s worst and least-accomplished film—and yet one that remains a major personal favorite of mine. White Star tells the story of musician Moody (complete unknown Terrance Robay), whose pure, ethereal synth music is meant to rise like a phoenix out of the ashes of a divided Germany, and his ruthless, cheating manager Kenneth Barlow (Hopper), who can only be described as a psycho Colonel Tom Parker or Tony Defries. The story is interesting—I do believe, in earnest, that it contains a smart critique of mythmaking and capital—and (now notably) contains an unforgettable monologue about Barlow’s impoverishment that is, effectively, identical to Trump surrogates’ defense of his own many bankruptcies. (“There’s only one type that goes broke, and they take chances, and they take risks. … That only happens when millions change hands.”)

Klick’s alternately fluid and kinetic style is largely rendered static here, and large swaths of narrative are patched over by absurdly long radio announcer exposition. This is Hopper's responsibility: although he appears in virtually every scene and is unequivocally the center of the film, he allegedly refused to shoot for more than two hours a day, and only under the influence of cocaine. Klick claims no foreknowledge of Hopper’s behavior, and says that as a result he spent most of the production on the phone with lawyers and agents unsuccessfully lobbying to control Hopper’s behavior or to have him removed from the film.

As a Klick fan, I’m tempted to resent Hopper for contributing to his early retirement, but the fact is, his performance—whether by design, the severity of his drug and alcohol abuse allegedly at its nadir, or some combination—is phenomenal. (Based on interviews, the screenplay, and marathoning through this series, I suspect Hopper’s performance is much more self-aware and deliberate than his toxicology might suggest.) It’s violent, pathetic, self-loathing, manic, unhinged, manipulative, and unlike anything else I’ve ever seen, save Hopper’s own turn as Frank Booth in Blue Velvet. The fact that it exists as a kind of vortex that destroyed the movie that contains it makes White Star, for me, an essential film. It’s unavailable in the U.S. and the pristine print is apparently unique, so don’t miss it.