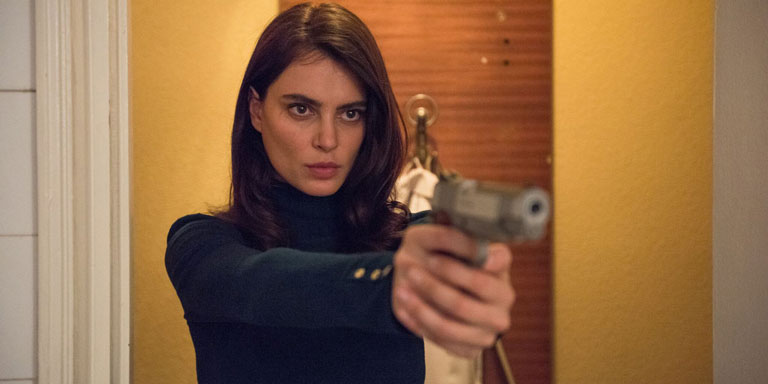 Since at least Police, Adjective (2009), Romanian director Corneliu Porumboiu has taken an interest in the nuances of communication, and his deadpan neo-noir The Whistlers is no exception. Police co-star Vlad Ivanov plays Cristi, a corrupt undercover cop summoned to the Canary Island La Gomera, where he must learn an indigenous language based on whistling in order to communicate with his suspects-cum-co-conspirators. As their logic has it, the piercing, musical noise of Silbo Gomero, which can travel up to 5 kilometers, is indistinguishable from birds and undetectable by scanners. And so The Whistlers is essentially a rehearsal-intensive heist noir in which most of the prep time is spent with the criminals sticking fingers into their mouths. (Disconcertingly, I don’t recall seeing anyone washing his or her hands.)

That’s not to say The Whistlers forgoes thriller conventions in favor of absurdity. With a non-chronological structure delineated by character names, the narrative jumps back in time to introduce conspicuously named femme fatale Gilda (Catrinel Marlon), a criminal envoy who sleeps with Cristi to help him avoid raising the suspicions of the officers surveilling his apartment. “Forget what happened in Bucharest,” she tells him once he arrives in La Gomera. But of course he won’t: this is a film that, for all its understated cool, goes all-in on knowingly obvious cinematic conventions, references, and self-reflexivity, whether its having a presumptuous location-scouting filmmaker stumble into a warehouse during a criminal meeting, reenacting the Psycho shower scene, or casting the bad guy with Agustí Villaronga, best known internationally as the director of arthouse exploitation film In a Glass Cage. Even the occasional inscrutability of the countless twists and turns might as well be a nod to convoluted plot of The Big Sleep. Suffice to say, it factors in a jailbreak, another corrupt cop, double-and-triple crosses, familial revenge, a trip to Singapore, and a mattress full of money. Lacking the historical gravity of its predecessors but no worse for it, The Whistlers is one of the most droll and purely pleasurable films to emerge from the Romanian New Wave.

The Whistlers was reviewed at the 2019 Toronto International Film Festival and also plays at the New York Film Festival October 6 & 7. It arrives in theaters February 28, 2020.