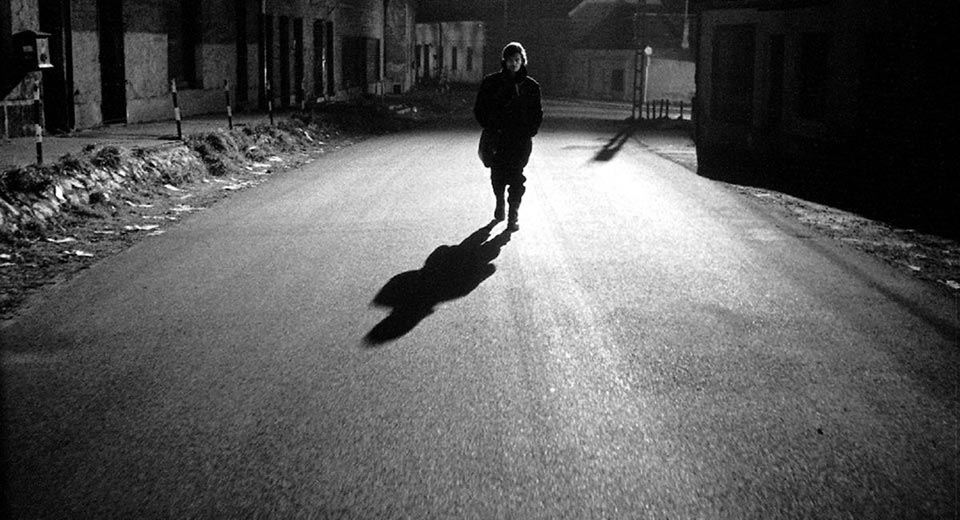 How quickly time flies – winding down after two years, Metrograph's inaugural series Welcome To Metrograph: A to Z inadvertently saved some of the best for last as they enter the tail end of the alphabet.

Viewers intimidated at the thought of spending over seven hours with Béla Tarr's lauded Satantango take comfort – Werckmeister Harmonies flits by in a breezy two-and-a-half hours well-spent, floating in a state of apocalypse and unease in an isolated Hungarian town. The nameless, mostly timeless place's few touches of technology, including a dusty hotel lobby television and roomful of busted washing machines, remain off or inert. The film's unsettling cohesion is astounding considering it was filmed interrupted over three years, with seven cameramen composing the film's 39 shots (though Satantango DP Gábor Medvigy captured 20).

Harmonies mostly follows János Valuska (Lars Rudolph), a curious young man smart enough to explain an eclipse to and using a bar of drunk townsfolk in the film's opening shot, but whose childlike trust marks him as a holy fool in a godless world. Presaging the doom coming to town describing chaos during the eclipse's "awful incomprehensible dusk," János' optimism has animals fearing fate rewarded and warmed by a returning sun, the sole outcome he can imagine. The sun does eventually break through the bleak fog of János' town, but only to shine on a mystery stripped bare rotting in the town's square.

A paper deliveryman, János is in a unique position to witness the slowly encroaching black cloud created by a mysterious circus' arrival. Some say they're a cover for thieves to murder in the night; their numbers vary from three to three hundred and their main attraction is an enormous preserved whale. The film is based on László Krasznahorkai's novel The Melancholy of Resistance, but deviates with wholesale creation of The Prince, the circus' other, unseen attraction. A riling element luring and infecting the population, The Prince summons a collective will from a town under duress, facing a mid-winter coal shortage and unresponsive local government.

Tarr is explicit his films aren't allegorical, saying "film is always something definite—it can only record real things." While audiences might be tempted to reach for political or biblical allusions, the mounting sense of unrest, fear, and the slow surfacing of a cataclysmic destruction innate to the town, just as each person's stomach holds the catalysts of its own bodily decay at the ready, are right there before audiences eyes, no metaphor or allusion needed.

The long takes allow audience collaboration; as with life we're editors of our own reality, no cuts, just blinks. A rampaging mob halt on seeing the frail, withered body of an old man, snapped back by mortality's undeniable fact. A rioter's journal notes, "We didn't find the real object of our abhorrence and despair, so we rushed at everything we came across with wilder and wilder fury." The whale's decaying corpse exposed, a marvel stripped of dignity, is all that remains.