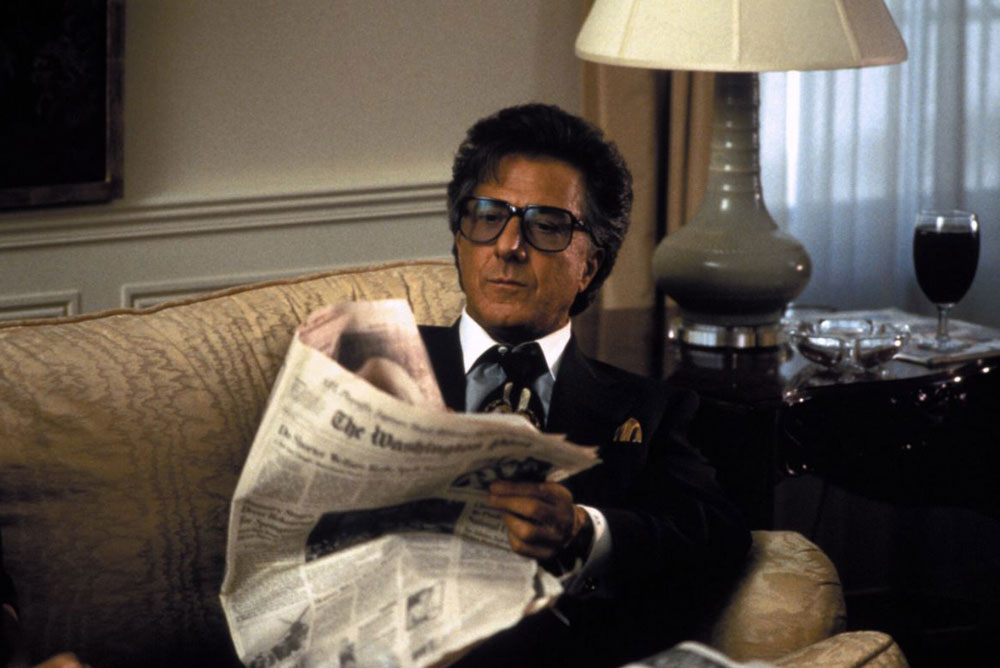 At one point in Barry Levinson’s 1997 political satire Wag the Dog, Dustin Hoffman as a smarmy Hollywood producer says, “That is a complete fucking fraud, and it looks a hundred percent real. It's the best work I've ever done in my life, because it's so honest,” which has as much to say about American politics as it does the nature of Hollywood at the cusp of the 2000s. In hindsight, Wag the Dog was the perfect film to close out the Clinton presidency, releasing on the cusp of the Monica Lewinsky scandal and Clinton’s bombing of Iraq.

Feeling like a mutant amalgam of ideas later explored (perhaps more richly) in Primary Colors (1998) and Bowfinger (1999), Wag the Dog pairs Hoffman’s Hollywood producer with Robert De Niro’s political spin doctor, green-screening a fake war into American news media to distract citizens from a political sex scandal, a ripped-from-the-headlines premise that sounds like something Armando Iannucci would adapt into one of his farces a decade later, only Levinson’s film has no explicit real-life referent.

What’s most interesting about Wag the Dog is ultimately not even the film itself — which is entertaining, albeit glib, largely (if not entirely) due to the eccentric performances of its leads and supporting cast — but how its ideas around doctoring news media are no longer the stuff of fiction, let alone comedy. When we see Hoffman and De Niro ask a young actress, played by Kirsten Dunst, to perform against a green screen as an Albanian refugee dodging exploding shells, it no longer feels as far-fetched as it did in 1997. Deepfake technology wasn’t on our minds during the Clinton administration, and this scene resonates differently in an era where indexicality has gone from an ontological axiom of photography to a minor nuisance to be elided.

Wag the Dog may make us want to curse our previous — and perhaps current — administration, but what emerges as the true enemy is a public with an unquenchable thirst for conflict. On the surface, the commentary skews heavily toward politicians’ reactions to sex scandals (which existed well before Clinton), but the film’s real target is an American electorate that lets itself be led to the altar in exchange for an uninterrupted media feed.

Wag the Dog screens on 35mm at MoMA at 3:00pm Friday in the series Wynn Thomas, Production Designer