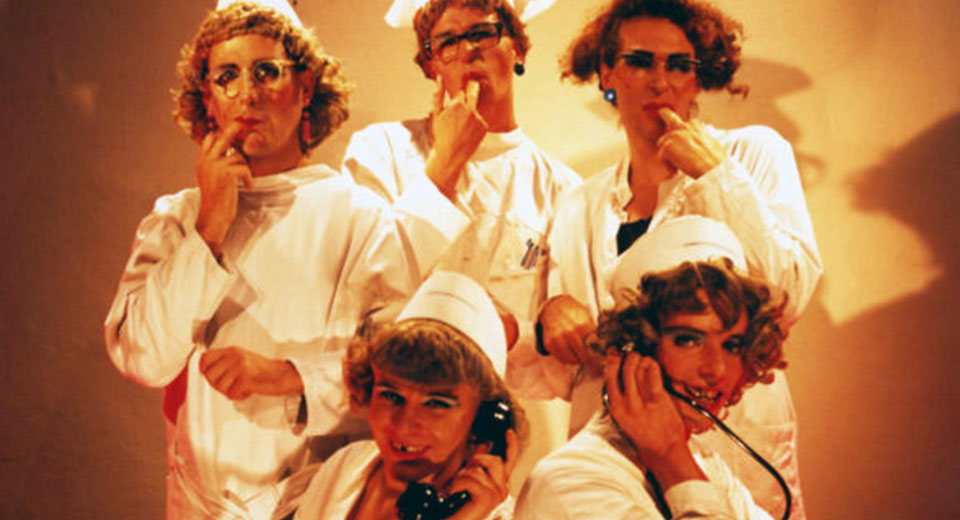 If you’ve seen a film by Rosa von Praunheim, camp extraordinaire of West Berlin, it was most likely the provocateur’s 1983 musical City of Lost Souls, a slice of Jayne County-starring decadent degenerance that perfectly showcases the prolific filmmaker’s taste for weaponized flamboyance. Made just three years later, in the year in which HIV was named as such, Praunheim’s A Virus Knows No Morals is far more bleak, cynical, and downright angry that its cinematic predecessors, but it manages to fuse Praunheim’s joint concerns of activism and camp into a perfectly poisonous satirical PSA.

A Virus heralds Praunheim’s shift towards becoming a vocal AIDS awareness activist and ardent chronicler of the struggle for a cure. (He shot three more films about the disease over the next four years.) In it, he takes caustically critical aim at pretty much everyone. The film opens at a highfalutin champagne party where the many villains ballyhoo the success they’ve achieved in monetizing the AIDS crisis. Among those introduced is Dr. Blood, a physician of “pestilence, plague, and death” who enjoys subjecting gay men to horrifyingly unethical tests before informing them that the “best defense is natural shame.” She appears flanked by an outfit of chorus members in nurse-drag, who cheerily sing that “your fate is in your hands” when staving off late-night horniness. In purely von Praunheim fashion, the choir serves as a Greek chorus of sorts, appearing later as “widows” and “sailors’ brides.” Others lampooned include a sodomy-obsessed tabloid reporter, “AIDS revolutionaries” bent on spreading the virus, and a conservative gay bath owner, played by Praunheim himself, who has become stricken with the disease.

The film is often called a comedy, and Praunheim is very funny, but even the most ridiculously over-the-top moments, including a visit to a quarantined island called “Hellgayland”, are presented with some seriously urgent snark. The film’s homemade set design and gnarly makeup traffic in the absurd syntax of Ulrike Ottinger (whose Madame X played The Quad’s Queer Kino series alongside this film), but to the effect of a call to action; a timebomb that spares no sense of dread or mordant rationality in dealing with its subject.